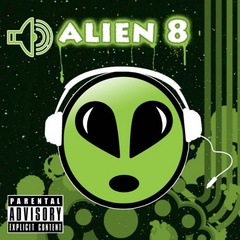 HOMETOWN: Peabody, MA! Current Competitions: Converse Battle (Our hometown so please vote!) Warped Tour Battle Of The Bands 2nd Place in MA Currently Placed 3rd at this years NCN’ Rompetition Professional EP in the making Shoot us an Email for all of our songs! Or check out the links on our page. Alien 8 is a Punk Rock/Pop Punk band located in Peabody, MA. Currently we are hoping with the help of our lovely fans and judges, that you can get us on Journeys 2010 Backyard BBQ w/ Mayday Parade and Anberlin. Please it is our hometown! Thanks for all the support! Bio: A highly energized buzz not only comes in a can. Open up your ears to the intensifying, high driven music “Alien 8” brings to the table. Whether it’s the upbeat power punch guitars knocking you in the face, or the melodic smooth breakdowns coming together in pace, this band brings forth what no band has done in years. It may be pessimistic to limit this band to a local standard. With the release of their 5 song demo “The Abduction” (November 2009), along with placing 3rd in this years NCN’ Rompetition 2010, Alien 8 may just be the next big upcoming band in 2010. The formation of Alien 8 began mid October of 2009. In just 3 weeks, the band played their first gig, and headed in the studio to create their demo. The plan was to record a single, and go from there in the future. However plans were interrupted as the band wrote not 1, not 2, but 5 originals to be placed on their demo. One listen to these songs will quickly reminisce the great sounds from bands “Blink-182”, “Green Day”, “Bouncing Souls”, and many more. However, Alien 8 spreads their sound distinctively while working on their upcoming EP release. Please everyone, we encourage you to search us on Youtube, facebook, Myspace, Reverbnation, ANYTHING, and watch our LIVE videos. Our Calender will constantly be updated for those interested in our shows. Our strength is up on stage, and for those who can’t make the shows, catch all the action on our channels.

Alien 8 places 3rd at NCN by
Alien 8's first appearance @ this years NCN Rompetition was well worth their while as they rock the 75+ at the All Asia in Cambridge, MA. They were rewarded with 3rd place, and it came down to...
p
A
n
E
F
Song Title by Artist Name
987654d
LM
iAnEAqqqq