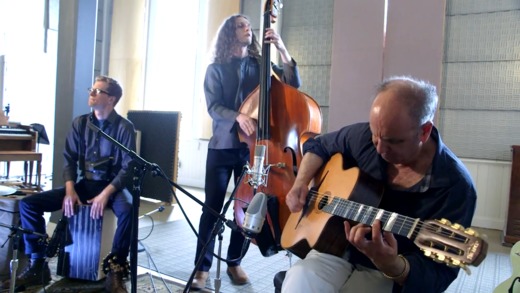 The award winning Ameranouche (pronounced uh-MARE-uh-noosh) is the premier gypsy jazz trio in the United States. The name is derived from two words: American and Manouche, the gypsy tribe of guitarist Django Rienhardt. This rip-roaring ensemble is a super force of hot acoustic jazz, mixed with soul, flamenco, and bebop influences. Played on traditional French jazz guitars, the music is rhythmic, vigorous, and elegant. Whether they’re playing a musette waltz from 1930 or a funk-inspired original tune, Ameranouche is the sound of gypsy jazz in the 21st century. .

Note: All requirements listed herein are negotiable and may vary

Ameranouche can provide a complete, high quality sound system that goes from a very small, battery powered PA system for events where AC power is not readily convenient or available to a full concert PA that will work well in as large as a 500 seat event or any number seat event less than 500. This is all of course, dependent on the needs of each individual event

Ameranouche can also play completely acoustic without amplification at all.

In a concert or nightclub situation where we will NOT need our own system, our needs are as follows

The band likes to use their own backline system which consists of their on-stage 16 channel mixer and two powered speakers set directly beside and behind the two guitarists of Ameranouche on stands and give one XLR lead to the house main sound system from that system. They mix their guitars, vocals and bass through their 16 channel on-stage mixer and send it to the house in this fashion. It assures Ameranouche a consistent sound. All is needed from the house engineer is one flat channel from Ameranouche's output XLR signal to the house mixer then split that signal at the house mixing console to another flat channel with no effects other than graphic EQ and then both channels are to be panned to each side for a stereo effect in the mains. No on stage monitors are required with this set-up from the house sound

Should Ameranouche, through mutual agreement between presenter and Ameranouche, go through a house system solely without the above mentioned backline system, their needs are as follows:

A high quality reverb effects and also an echoing effect that can be combined from the house system that is capable of producing a large reverb hall sound and a long slap-back echo in a full 24 bit conversion ratio. These effects signal must have the ability to have the effects in the monitors as mentioned above.

The members of Ameranouche reserve the right at their discretion during sound check, to use the band's own 16 channel mixing console and give the house sound engineer one XLR feed to the house sound system's mixing console and use the above listed set-up that will be provided by the venue, should any of the members of Ameranouche feel at sound check that this is necessary

Contact Ameranouche for any further needed clarifications on this matter

Ameranouche also has a very clear and concise rider attached to our contract that is very specific to the band's stage and lighting requirements, which is available on request

Review of Gypsy Jazz workshop in Cambirdge MA 3.30 by Robert Saunders
I had a great time at yesterday’s workshop and concert by Ameranouche at Outpost. I had not heard these guys in the round; they were hot! Their specialty is exotic arrangements of tunes from the...
Ameranouche concert review by Bob McKillop by Maine Folk Music
Ameranouche Trio at The Alamo Theatre, Bucksport, ME By Bob McKillop These days, great music is all around us and available to us instantly; all we need to do is click a link on a webpage, and we...
Ameranouche Songs featured on Silver Screen by The Wire - Seacoast Entertainm
Gypsy Jazz on The Threshold of Hell" Written by Patrick Law, The Wire Magazine Sept 19th, 2007 Ameranouche songs featured on the silver screen Something about the gypsy jazz sound of Ameranouche...
Ameranouche Is Nice by Metro Pulse - Knoxville, TN
Metro Pulse - Lisa Slade Ameranouche is Nice These gypsy jazz virtuosos fe... Ameranouche is Nice These gypsy jazz virtuosos feels blessed every time they play by Lisa Slade Attitude can be tiring,...
Conversation With Richard Sheppard of Ameranouche! by Roanoke Times, VA
Roanoke Times Tamara Gaskin, Roanoke Times –Thursday, March 6th ... Tamara Gaskin, Roanoke Times –Thursday, March 6th 2006 Not entirely sure that you would know gypsy jazz if it smacked you in the...
Band of The Week: Ameranouche by Atlantic City Press
Published: Thursday, October 18, 2007. For those of you who haven't been fortunate enough to know of one of the greatest jazz guitarists of the 20th century, Django Reinhardt, Saturday, Oct. 20, is...
Give this Hot Gypsy Jazz a listen by Seacoast Entertainment Magazin
Seacoast Entertainment; Portsmouth Herald Give This Gypsy Jazz A Listen" By Christopher ... Give This Gypsy Jazz A Listen" By Christopher Hislop New Hampshire's own Ameranouche!!!, has created an...
CD Review "Homage A Manouche" Ameranouche by The Wire
The Wire - Seacoast Entertainment Magazine Ameranouche Homage A Manouche Self Released ... Ameranouche Homage A Manouche Self Released Cd Review, By Jon Nolan, The Wire Magazine, Oct 4th, 2006...
Welcome To Gypsy Country by Lowell Sun
Welcome to Gypsy Country By JILLIAN LOCKE, Sun Let me take you to a place where people congregate to share music and love. A place where laughter is the only drug and an enormous sense of unity is...
"A nationally touring act with an international so by Hippo Press
By Erica Febre It's hard to talk about Ameranouche, a hot gypsy jazz trio, without mentioning one of gypsy jazz's greatest musicians, Django Reinhardt. Ameranouche's members say Reinhardt is their...