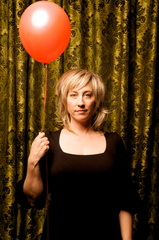 From the rustic rush of "Step Out of the Shade" to the bittersweet lilt of "Water Landing" to the gentle acoustic intimacy of "Two," Songs for Bright Street's 12 original compositions (plus a slyly countrified reading of the Blondie classic "Dreaming") showcase Speace's unique gifts, offering catchy Americana with indelible hooks, sharply observed lyrics and a gritty urban edge. Among those impressed by her sassy songcraft is legendary folk-pop songstress Judy Collins, who chose Songs for Bright Street to release on her new Wildflower label.

Amy Speace has already won a loyal grass-roots fan base, thanks in large part to live performances that merge warmth, humor and emotional immediacy, and to a tireless touring schedule that's already taken her across the United States. She's also won considerable critical acclaim, with The Village Voice observing that Speace is "taking her Americana away from twangy contemplation toward tangy confrontation" and noting that she's "not another of those breathy would-be child poets, but a real singing writer of songs." Time Out New York stated, "Amy Speace plays sweet, twangy folk music with a clear voice and an innocent vulnerability," while The Nashville Scene noted that she "balances wry humor with open-hearted honesty." And renowned Nashville critic Robert K. Oermann, writing in Music Row, dubbed her a "new star."