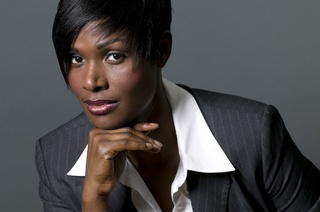 For Angela Bryant-Brown, praise and worship is more than a style of music. It is what she does in response to God’s presence in her life. Her desire is that the music she shares will move others to recognize the awesomeness of God and praise Him in their own lives.

Her passion for worship has led her to become a vibrant praise leader and prolific songwriter. Her original songs, such as “Give God the Praise” and “If We Obey,” have ushered many congregations into the presence of God and will do the same for listeners of her debut CD, From You (released 2005), sophomore CD, In Hymn I Trust (released 2012) and holiday CD, A Song In the Air (released 2008).


A native of Syracuse, New York, Angela recognized her calling early. When she was just 7 years old, she began singing in church, school and anywhere the Lord presented an opportunity. As she grew, she never compromised that call.


Since then, Angela has earned a MBA and is active in ministry for various kinds of worship services, retreats, conferences and solo concerts. She has shared the stage with Christian recording artists, Witness, Byron Cage and John Stoddart, and appeared on Cornerstone TV and 3ABN programs.


In 2005, Angela established her own record label, Sounds4theSoul. Its mission
is to provide uplifting, soul soothing inspirational music and spoken word for all audiences. One of its newest services is Sofa Serenade, an in-home concert
performance.


In 2006, Angela founded the non-profit organization, By Your Side Ministries, which provides support to teen parents and their dependents.


In 2009, she launched the blog talk radio show, Life Happens: So what are you going to do about it? a show discussing real life solutions for real life issues.


Angela considers herself a living testimony of what God can do for those who
love and trust Him with their whole heart. Because of His abundant grace and
unconditional love, it is her mission to share the goodness of God with everyone He places in her path. When asked what her message is, Angela says, “You will not experience a genuine sense of spiritual fulfillment until you realize and live within God’s will for your life.” As she says in one of her songs, You were born with a purpose, perfectly designed, When God breathed life into you, He had a purpose in mind!