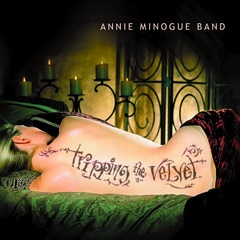 Meet AMB! Their driving and energizing sound, which combines a gutsy rock attitude with great pop sensibility and a hint of the blues, is reminiscent of some of rock’s greatest female icons like Heart, Stevie Nicks and Pat Benatar while still exemplifying a unique and contemporary edge.

The band has put on amazing performances all over the USA alongside some rock legends:

Annie Minogue has been a singer, songwriter and musician her entire life. Her father was a professional musician and their household in New York City was always filled with music and talent, giving her a positive perspective of the industry as a wonderful way to make a living. Her musical influences have ranged from Patti Smith to Led Zeppelin and everywhere in-between.

Her breakthrough solo debut album "Home" was released in 2000 on the Nippon Crown label in Japan, pulling in nonstop great reviews and leading to another release on Annie's own imprint Liberty Place Records called "Love Parade."

Minogue's craft for songwriting along with her powerfully expressive voice have given her firm roots within the music world. Having garnered acclaim and praise from some of today’s top music supervisors and program directors, Minogue's music has enjoyed some substantial media time, being featured on film, TV and radio:

And, as a final addition to what already has been a highly acclaimed career, come the awards and endorsements:

AMB just released their latest CD “Tripping The Velvet," a true tour de force of songwriting, production and musicality. Just one listen and you will understand why so many people keep falling in love with their music in the first place.

Voice: 1 mic with straight stand (I will bring my own mic Beta 58A)

2 di boxes by drummer for tracks