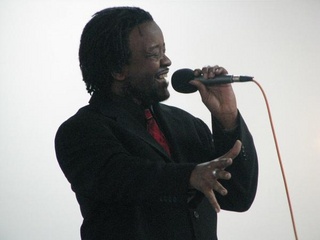 Robert is a Christian poet, author, motivational speaker and multiple award-nominated spoken word artist. He has a strong psalmist anointing on his life. Robert recently released his debut CD, "The Heart of a Man", which is now available for purchase. His song, "Demolition Man" is featured on a compilation CD through Moiko Records entitled, "The Gospel Truth", which is one of many projects created to raise money for non-profit organizations worldwide. Robert's first book, “Words of Inspiration: A Collection of Poems for the One You Love”, released in 2006, was selected as the WeAreFearless Online Book Club's "Pick of the Month for July 2007. His second book, "Words of Inspiration: Speak Healing," was released in 2008. Robert and his wife, Marlas, are the co-founders of Words of Inspiration Ministries. Consistently receiving favorable reviews, his work has been featured in several magazines, including the January through March issues of Christian Voice Magazine, cover stories in the January 2008 issue of Global Influence Magazine and the January 2009 issue of Divine Inspirations Magazine. He has also been featured in Medium Magazine, Buzz Wire Magazine, Mo Favor Magazine, and a host of others. Robert has been consistently featured on the "Poetry Over Music" compilation CD series which include: Volume II: Different Shades of Love with his poem "Empty"; Volume III: Rhythm & Poetry with his poem “Here and Now”; and Volume IV: Freedom Through Music with his poem "God's Gonna Cut You Down. His song, “Cries of the Lord” is included on the "Blessed of the Midwest Mix Tape - Volume 1" CD compilation. Robert currently serves as the Creative Arts & Poetry Editor for Divine Inspirations Magazine where he is also a contributing monthly columnist. He is sought after to create personalized poetry for various individuals and events. He has also been featured on numerous radio and blog talk radio shows. Being an accomplished public speaker, he has ministered the Word of God at several women, men, and youth conferences and has been a featured panelist for Go' on Girl Book Club's National Conference in Cleveland, OH and is an annual speaker at the WAGFEST/NIANAF conferences. He was recently featured on a segment of “The John Lanier Show”, a syndicated Christian talk show based out of Fayette, Alabama as well as having a feature segment on the “I’m Just Sayin” Christian talk show with host Pastor Dan Willis. Following the assignment the Lord placed on his life, he is currently hard at work on the third and fourth books in his popular poetry series, as well as a novella he is co-writing with his wife, all set to be released in 2010.

One mic, preferably cordless, a CD player and a stool.

EOTM Buzz Wire Magazine - March 2008 by
Several of my love poems were featured in this e-magazine.
Medium Magazine - April 2007 by
Medium Magazine is a London-based magazine. I was overjoyed to have my poetry featured in this magazine.
The Post Tribune (Northwest Indiana) by
This is a local newspaper that did a story on my first book in July, 2006.
Featured in Jacksonville Courier - Jan 2009 by Jacksonville Courier
This was an event I spoke at that commemorated the life of Dr. Martin Luther King Jr.
Feature in Poetry Over Music Magazine by
I was featured in the first issue of this incredible magazine about the poetry industry.
Global Influence Magazine - January 2008 by
We were very excited to be the feature story and get the cover shot for the January '08 issue.
Divine Inspirations Magazine - September 2008 by
My poetry was featured in Divine Inspirations Magazine. I have also been named poetry editor as well.
Divine Inspirations Magazine - October 2008 by
My poetry is again featured here in the poety corner section of the magazine.
Poetry Over Music - Volumes II & III by
I was able to be a collaborative artist on this music project. Each poet is given the opportunity to write a poem based on a hit song. My poems are featured over "Spend My Live With You" by Eric...
Interview on Global Influence Radio by
This was truly a wonderful interview and with one of my favorite hosts, Evangelist Shanetria Peterson. I talked about my new book and upcoming CD project.
p
A
n
E
F
Song Title by Artist Name
987654d
LM
iAnEAqqqq