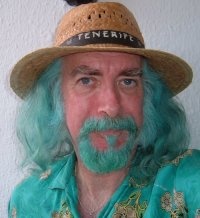 Bard of Ely is a singer-songwriter and poet from Cardiff in Wales who moved to Tenerife in the Canary Islands in 2004.

Bard of Ely was the compere for the Avalon Stage at Glastonbury Festival in 2002 and 2003 and he has also performed many times at the event as well as at the Green Man festival, for which he dyed his beard green.

Bard of Ely's song You're a Liar, Nicky Wire was rave reviewed in the NME and appears on the Taffia EP on Crai Records.

Under his real name Steve Andrews he is a columnist for the Tenerife Sun newspaper and also writes for Tenerife News. He is the author of Herbs of the Northern Shaman (Loompanics)and in the late '90s was a presenter for the TV series of In Full View on Choice.