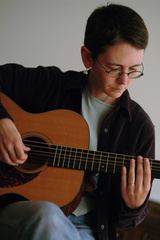 Beth DeSombre (pronunciation: de-SOM-bree) released her debut CD, Crooked Highways, in December 2007. It has already been receiving national and satellite radio airplay. The first track, No Toll in Canaan, has won honorable mentions in national and international songwriting contests, and has spent time at #1 on Neil Young's list of more than 2400 current protest songs. Folk icons Pete and Maura Kennedy called it "one of the finest songs we have ever heard."

The CD was produced by Dave Chalfant. Backing musicians on the album include Tracy Grammer, Jim Henry, Pete and Maura Kennedy, and Eric Lee. Beth's songwriting influences include Dave Carter and Richard Shindell. Her songs, as one reviewer said, "record the experiences of average individuals in a way that ennobles them and reveals their dignity." They evoke "favorite sweaters and heirloom quilts."

After an interruption in her songwriting and performing to earn a PhD in Political Science and begin a career as a college professor, Beth returned to the Boston area to become more involved in music. Though she has played primarily in New England, she has begun touring in other parts of the country as well. She has recently made special guest appearances at several major folk festivals (Boston, New Bedford Summerfest, Strawberry Park).

One vocal mic and one DI (unless I'm playing with a mandolin player, in which case I'd need two vocal mics and two DIs).

Beth DeSombre, Crooked Highways by Sing Out
Beth DeSombre's most well-known product is her scholarly book Domestic Sources of International Environmental Policy. This Wellesley political science professor also has a musical bent, though, and...
Art Inspires Art at Davis Concert by Alice Lee
Between the high walls of the Lulu Chow Wang Gallery entrance and a few feet below a glowing exit sign, Beth DeSombre, professor of political science, opened her performance on Tuesday afternoon...