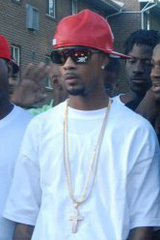 When you think of hip-hop, some of the biggest names in the game should come to mind; Notorious B.I.G, 2 Pac, Big L, AZ, Nas and Jay-Z to name a few. All of these rappers have made there names ring a bell in the music industry. Regardless of being a mainstream artist, an underground emcee or just having a hood buzz, these artists did anything necessary to make a name for their selves. Marylands own Cell Spifire is following in these legendary footsteps as he plans to shine with the best of them. Born in Marylands capital, Annapolis on October 21, 1986, Comacell Brown was destined to be a star.

In the early 90s, Comacell was raised by his grandparents. At the age of 8, Comacell became aware that his mother was addicted to drugs, forcing him to become a man quicker than most average boys. During elementary school, Comacell attended the Salvation Armys after school program. This program gave him the opportunity to experiment with art. He quickly developed a passion for art and was well on his way to becoming a talented artist. Comacell experimented with paints and got into painting custom shirts for fun. Later in Cells life, this fun hobby blows up into a local business which brings him money and publicity. (more to come) In middle school, Comacell met a fellow student who had trouble pronouncing his name. So the kid gave Comacell the nickname Cell which would stick with him for the rest of his life. Cells old friend Tre, had a recording studio owned by his father. Cells cousin Mouse had already been working with Tre making music in his studio. This would be the gateway to Cells newest hobby, rapping. Together, Tre and Mouse taught Cell how to rap. The tightly knitted trio formed the group Keep It Raw aka The Raw. They free styled songs until Tres father declared all the racket had to stop. Although they no longer had access to the studio, the trio continued to write. They were literally back on track when Cell got his first computer. He set up a small digital audio work station with his computer and the Keep It Raw boys were able to record again. As songs were heard locally, the Keep It Raw squad began to gain popularity. Many people wanted to join the group but only the realists were able to get down wit the crew.
By the time Cell entered high school, he already had a buzz for rapping, painting shirts, and playing sports (football, basketball and baseball). He and a couple others created their own clothing line called Banco Pop. They specialized in painting custom shirts with abstract designs. Banco Pop quickly became popular around school and eventually spread throughout the city and state. His shirts got the attention of several rappers as well. Free Way and the Ice City Click, Memphis Bleak and Backland all have Banco Pop apparel.
With clever punch-lines and superior deliverance, Cell gained respect as a rapper. When people heard him rap, they would always say He spit-dat-fire! This repeated comment gave birth to his stage name--Cell Spitfire. Cells popularity sky rocketed through high school. He was known for selling mix-tapes and making shirts. As a young hustler, he jumped on anything that would make him money.

In 11th grade, Cell assembled the official Keep It Raw roster. They recorded their first organized mix-tape entitled The Keep It Raw Compilation Volume 1. As the executive producer, he made sure everyone in his squad had time to shine. The mix-tape featured; Cell Spitfire, Tre Da Kid, Mouse Milli, Black Da Gorilla, Nem, Young H, Greeny, Kojo and Big Freeze, all members of the infamous Keep It Raw.
When the mix-tapes hit the street, people went nuts. The mix-tape had everything you wanted to hear, from street based stories, commercial songs, to gun popping and punch-line raps. The success and popularity of the mix-tape gave them several invitations to do shows and perform at parties. Keep It Raw blew up across Annapolis as well as other parts of Maryland. Cell graduated from Annapolis High School in June 2004 with his mind set on the future. He made the decision to move from Annapolis to Atlanta GA. to attend the Art Institute. Majoring in Graphic Design, he is now a busy college student driven for success. With access to a small studio, he is still recording songs and making hits. He is meeting new people and making connections in the dirty south. It is only a matter of time until the world hears his voice and he makes his mark in the rap game.