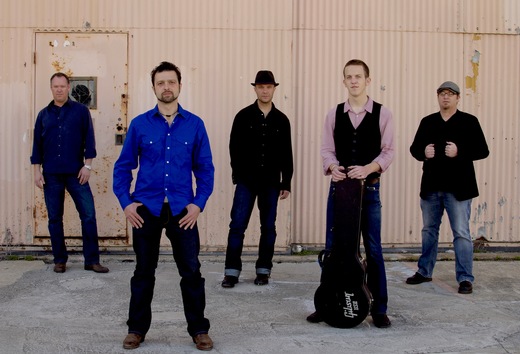 Chris James and the Showdowns

Chris James and The Showdowns are a band with a reputation for “keeping it real” and delivering unbridled original Roots-Rock-Americana music. Their live shows and latest album are energetic and emotional, with well-crafted memorable songs that feature uplifting vocals, dance driven grooves, and tastefully brilliant guitar work.

—“Chris James is a terrific singer-songwriter with a real honest approach and style. His songs speak to everyday people. Reminds me a little of ‘The Boss’…”       - J. Bowman (Lead Guitarist for Michael Franti & Spearhead)

—“Chris James’ style of writing is hard to deny as it rings of times and life situations we can all relate to. It’s nice to see an artist and band hold true to americana roots while still giving you a rock and roll kick in the ass!”    -Starita (Music Producer, San Francisco)

—“Chris James is as captivating a performer as I have seen in some time. His songs are well crafted, his energy on stage is contagious, and the truth in his lyrics is undeniable.”      -Ralph Graceffa (Marion Grace)

Singer songwriter Chris James has devoted much of his life to writing and performing music. Growing up in the outskirts of Portland Maine, James made a name for himself by being a regular performer at parties, coffee houses and campfire sessions in the area; drawing from early influences like Tom Petty, Springsteen, Paul Simon, Johnny Cash and Jim Croc

He later graduated to the bar & club scene and thereafter adventured to San Francisco, CA where he and fellow musicians shacked into a two bedroom apartment which soon became their rehearsal space in the North Beach district. The project would later become the Small Change Romeos, an endeavor which would lead them to become perfomers and recording artists on a professional level and gain them a fan base throughout Northern California.

Over the past few years, Chris has spent much of his time back and forth between the Bay Area and New England where he is highly engaged in the music scene and carries a reputation for writing the kind of songs that just seem to “stick in your hea

Chris recently reunited with some former Bay Area band mates and has started up a new and exciting Rock-Americana project: Chris James and The Showdowns. They are currently performing the SF Bay Area regularly and work has begun on a full length album in one of the city’s premiere recording facilities: Faultline Studi

Blending together an original mix of Rock, Country and Soul, James’ material has been played on a host of radio stations including 107.7 The Bone, 91.1 KMUD, 90.1 FM, and KGO 810 AM. He has also had songs in commercial placements seen and heard on CNN and other cable networks. In 2009 his former band was featured on Sirius Satellite Radio and was the SNOCAP “Artist of the Week” for 3 consecutive weeks. Chris currently has songs featured on the Gotham Music Placement page in the categories of Rock and Count

James has performed hundreds of live shows on both coasts and has had the pleasure of sharing the stage, and/or the recording studio with many notable artists including members of Michael Franti and Spearhead, Tesla, Starship, Marion Grace, RA RA Riot and Under to name a few. 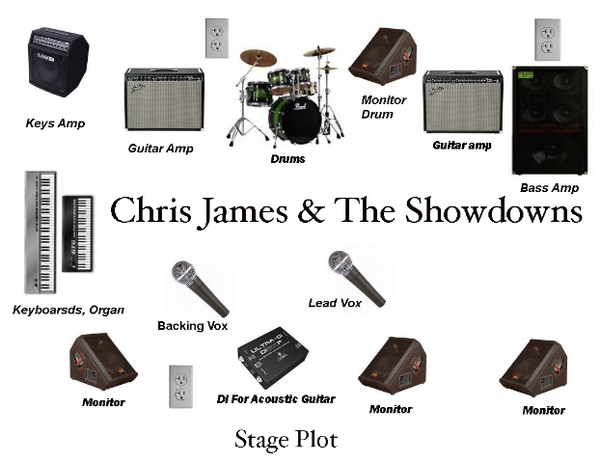