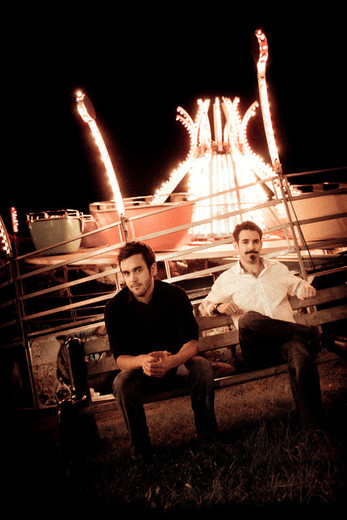 The Matthews Brothers are a folk / alternative country band from Hastings County, Ontario (2hrs East of Toronto). The band consists of two brothers and three other members.

The band can often be seen at The Legendary Horseshoe Tavern, Toronto (opening for NQ Arbuckle, Warped 45’s, The Submarines) where they play many of their favourite shows in Toronto. This venue has also seen them featured at Indie Week Festival 2009 – which soon after lead to the invitation to return once again (2010).

Playing at the 2011 Barrie New Music Festival, the band won awards for Best Song (What If I) and Best Folk act. They also played The Shelter Valley Folk Festival 2011.

The band performed at this year’s North by Northeast (NXNE) 2012 Festival as well as Toronto’s Festival of Beer 2012 at Exhibition place.

Their song Gem, was recently featured on the television show, Degrassi.  The band is now currently recording more.

The Matthews Brothers, “Hungry Heart” (MP3.com) by
Last month, we had the pleasure of introducing you to a country-rock duo out of “Canada’s backwoods” called the Matthews Brothers. They’re long overdue for an encore. You’ll recall the Matthews...
The Matthews Brothers @ Rancho Relaxo by
The Matthews Brothers have a floor stomping, knee slapping huge sounding country/folk style of indie-rock that truly has unlimited potential." - Two Way Monologues
The Matthews Brothers (New Music Canada, CBC R3) by
These classically trained brothers take inspiration from their past to write the diverse songs you hear today. These are tracks packed with orchestral layers of energy and honesty. Take a listen,...
p
A
n
E
F
Song Title by Artist Name
987654d
LM
iAnEAqqqq