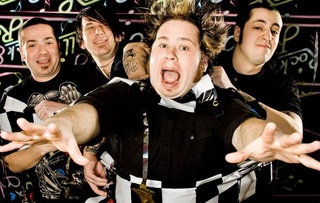 With all four members of CRASH ROMEO sharing a love for music and a New Jersey upbringing, this four-piece band came together in late ‘04, with their first show at the Stone Pony in Asbury Park and now with over 1 million plays on MySpace hasn’t stopped to rest yet. At the heart of Crash Romeo is lead vocalist/guitarist Travis Weber followed by Steve Anderson (guitar), Ryan Weber (drums), and Steve Mathews (bass). This powerful band has played countless numbers of shows including festivals such as Skate and Surf and The Bamboozle and was a featured band on the Vans Warped Tour for 2 weeks. Touring every chance they’ve got, the four have grown into a fast-paced rock band with the release of their first record ”Minutes to Miles.” They gained a huge audience across the United States by doing five tours in support of the album, one of which lasted over 60 day. Alternative Press praised Crash Romeo’s debut album, MINUTES TO MILES, as an album with "hooks, melodies, and classic song writing of power pop, meshed with younger punk aggression."-AP Magazine CRASH ROMEO aspires to create a distinct pop-rock sound and to push themselves as far as possible.Hailed by Outburn magazine as “a diamond in the rough of an oversaturated genre,” Crash Romeo's sophomore album, GAVE ME THE CLAP was released in 2008. The album was produced by Chris Badami (The Starting Line, The Early November). Jo-Ann Greene from Billboard Magazine and All Music Guide says “The energy and hooks land this set in a league of its own”. “Crash Romeo has made an album that is now a solid power pop record”- says Joe DeAndrea, absolutepunk.net. With Crash Romeo now a free agent there is no telling what they can do. They were also featured and interviewed on MSG TV and performed four songs live on Fearless Music TV on Fox. Crash Romeo is pushing its way though to the top and beyond. “Crash Romeo is going to be huge”- Alex Nunn, Rockmidgets.com