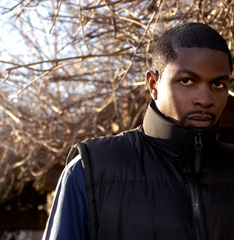 Emmanuel Edili aka DaCapo, Nigeria’s top rapper and hip hop producer comes to America and stamps his presence as Africa’s finest mc. This captivating lyricist who has produced over twenty albums and thirty hit singles as well as record sales of over 500,000 copies in Africa is now set to take the front stage in America's main stream hip hop. This rapper, musician, producer and songwriter, is out to yet again prove that hip-hop is universal, introducing a style of production which he calls “Fro Beat” that has a unique blend of fat beats and an African flavor. “This is hip-hop with an African perspective says this native Nigerian that was raised in Brooklyn in his early days and went back to his country with his parents to spend the next couple of years discovering himself, fine tuning his skills, going through the streets the struggles and the strains and still coming out the person which he says has found his purpose for living. “I been through a lot says DaCapo and I don’t wanna make fat beats and just put anything on it, I’ve learned from life and I know I got something to give to whoever chooses to listen”. “You cant help but listen cos I come through in a way that’s very inviting so whether it’s fro beat, a dirty south beat, a club beat, hardcore or commercial, its gotta say something cos that’s who I am”. His gospel album called “Simply DaCapo” received two nominations in the best rap album and special event CD categories of the 2007 gospel stellar awards. However DaCapo is going main stream with his next album that’s got some hot singles like “Fro beat", “Ama be here” and “the beat goes on”. DaCapo is the first MC to rap while playing the grand piano. The folks who saw this performance at the stellar awards pre show were stunned to see someone on a grand piano rapping and still maintaining perfect rhythm and I tight flow. So better keep you’re ears open to Africa’s finest.

Rise above the silver and Gold by Brave new Theaters
Rise Above the Silver and Gold” is based on a true story of a young amateur rapper, “Stanley Hanson” from Washington, DC who discovers his mother is unable to provide for his college education. In...
"Da Capo" A Nigerian Blazes the Trail on the US Mu by Naira land
This rapper is twice a phenomenon. He's one of the young Nigerians to watchout for in 2006. If you have listened to Styl Plus' "Olufunmi" remix version, Emmanuel "Da Capo" Edili did the rap for the...
Stellar awards winners announced by your music zone
Jan 15, 2007 ... DaCapo (Emmanuel O. Edili); Future Leaders Outreach Network Presents… Pursue Your Dreams Various Artists. Children’s Performance of the Year ...
Dacapo by My rythym
Bio Dynamic and multitalented songwriter & producer, Emmanuel 'Da Capo' Edili has had his impact on the Nigerian Hip Hop music scene. He has produced tracks for artists like Six foot plus,...
"Dacapo" A whole different level by Gospel city
Washington, DC - Simply DaCapo. Emmanuel “DaCapo” Edili is Nigeria’s most talented Gospel rap artist who is now taking America by storm. He has aligned himself with the production geniuses of R.O.U...
The Official 22nd Annual Stellar Award WINNERS (20 by gospel Flava
Jan 13, 2007 ... DaCapo (Emmanuel O. Edili); Simply DaCapo II:II ; True Life Jazz; Donald Lawrence presents The Tri-City Singers; Finale: Act One; EMI Gospel ...
Dacapo going mainstream by My space
About Dacapo Emmanuel Edili aka DaCapo, Nigeria’s top rapper and hip hop producer comes to America and stamps his presence as Africa’s number one mc. This captivating lyricist who has produced...
p
A
n
E
F
Song Title by Artist Name
987654d
LM
iAnEAqqqq