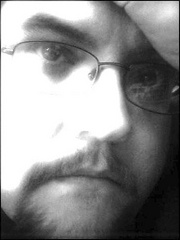 Music was a part of his life early on, and there are recordings of him performing as early as four years of age. When he first discovered the piano, it became a love affair that has lasted a life time. Dan learned to play by putting old 45s on his record player and listening intently to figure out the notes of the song. This led to learning about chords and melody.

As the 80's kicked into high gear, and artists like Prince, The Police, Phil Collins, and Bruce Springsteen became prominent, Dan listened and absorbed. As he grew older so did his talent and knowledge of music.

He started writing music when he became a teenager and has written hundreds of songs over the years. These songs were often captured on cassettes, using two tape decks to multi-track songs until there was a finished product. It wasn't until the onset of the "digital age" that Dan has made his music available to the public.

As Dan grew older and began writing, he continued to discover new artists and develop his recording techniques. Dan discovered such diverse artists as Elvis Costello, Peter Gabriel, Talking Heads, Lindsey Buckingham, and Pink Floyd. All of these became a part of Dan's stylistic vocabulary, and the language they speak can be heard in the music.

When Dan reached college age, he began playing with different bands. One of the first groups Dan played was a short-lived outfit called Sister Moon. In this group Dan played keys and also covered the bass parts, as well as sing back-up. When this project did not take off, Dan took a break from trying to perform with a band and focused on his career. But he didn't stop writing and recording.

In 2001, Dan met Johnny Barron and Don Davis and was asked to join their band Waterfall. Although the band went through various line-ups, Dan continued to perform with Johnny until 2005. Waterfall was a funky and diverse outfit, covering everything from Prince to Merle Haggard.

In 2005, Dan met country singer Sean Nelson and agreed to become part of his backing band, The Road Dawgs. Sean Nelson & The Road enjoyed a good run in 2006, achieving much local success and opening for such artists as Jason Aldean, John Anderson, and Blake Shelton.

In 2007, Dan was reunited with Don Davis from Waterfall who was now part of The Legendary 231 South Band. Members of 231 South briefly backed Sean Nelson as Sean Nelson & The Steel Cowboys. But when Shane Owens asked his old band 231 South to re-join him on the road (they had previously been released), they jumped at the chance and invited Dan to be a part of the band. They are currently performing regionally in Alabama, Florida, and Georgia.

During the midst of all of this, Dan kept working in his home studio. With the onset of the digital age, and the advent of using the PC as a recording and mixing tool, Dan began to experiment with hip-hop drum loops. He mixed these drum loops with guitar and keyboard, as well as other drum programs. When all this is swirled together with Dan's melodic writings, you get an end result that is most pleasing.

Dan's first official album LOVE & LOSS was recorded in 2002. A 2nd album was released in the spring of 2004 entitled MIND OVER MATTER. Check out Dan’s website at www.danwhigham.com.

Bass requires one direct line channel and one vocal channe

All four members require a monitor wedge with its own mix.