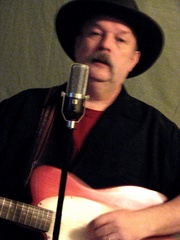 A multi-talented instrumentalists, singer/songwriter. Morris has a passion for his music.

“Music has always been the first love of my life. No matter what, whenever I tried to do something other than music, something eventually always kicked me back into music again. It’s definitely my calling in life”.
I've learned to appreciate all kinds of styles of music from bluegrass to jazz and everything else in between. It's all about what a song does to a person, or how it makes that person feel when they hear it."