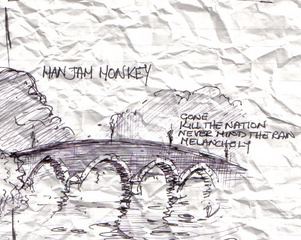 Dave Acreman and Ross Andrews are the unusually title Manjam Monkey. Long time friends, musicians and bandmates Manjam Monkey was formed to provide an extra outlet for their songwriting outside other projects. Originally concieved as a studio only project , they have performed as an acoustic duo with some success. Their sound has been likened to Love and Rockets, Radiohead, Beck, The Stone Roses and John Williams. They have been a regular feature in competitions on Ourstage since 2009, have one a Golden Auddy Award at Uplaya.com, recieved radio play on the unsigned chart show and their tracks Gone amd Melancholy are to be used in an independant film

Basic PA with input for 1 microphone

by
Manjam Monkey were formed in in 2007 as a studio only project but have since decided to gig , mainly as an acoustic duo comprised of singer/songwriter vocalist and guitarist Dave Acreman and...
p
A
n
E
F
Song Title by Artist Name
987654d
LM
iAnEAqqqq