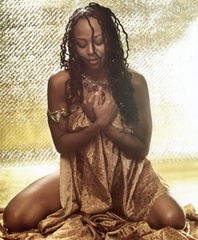 DeAnna Dawn has an artistic fire inside of her that cannot be ignored. Whether she is performing her own songs, writing for other artists, or acting on the silver screen, her passion is visible at all times. A free spirit who isn't afraid of trying new things, DeAnna Dawn, a Georgia native, puts her personality into each project. "I rarely write about negativity,I like to keep it positive." DeAnna told me, "Because we are all spiritual beings, there is always a bright side. I know I have a unique voice to offer to the world." DeAnna Dawn's musical influences range from Michael Jackson to The Beatles to Pink Floyd to Pat Benatar, and with her lead single Dawn of a Nu Day, the driving bass line, mixed with the rock guitar riffs and DeAnna's first soft, then powerful voice create a sonic masterpiece. The song, which is the title track to the Album, Dawn Of A Nu Day, was first created when DeAnna moved to Los Angeles and hooked up with Latrice Murray, who plays the guitar on the track. "Los Angeles was a culture shock," says Ms. Dawn, "with all of the different races mixed together. It really forced me to examine myself and how I approach everything. That stage of my life helped me see people for who they are." DeAnna Dawn has been around music all her life. As a part of the 90's group, Gumbo, which could be described as the Fugees before the Fugees, the group was featured on BET's Teen Summit, Soul Train and countless other outlets. On the acting side, DeAnna Dawn was in The Fantasia Barrino Story, Tyler Perry's Madea's Family Reunion, How I Spent My Summer Vacation, Juwanna Mann and other television and movie roles. Aside from being multi-talented artistically, it doesn't hurt that she is beautiful, inside and out. Her smile can light up any room, and her personality shines just as brightly. A vegan, whose only guilty pleasure is cake, her workout regimen is fierce, and it shows. But flaunting her sexuality isn't her style. It's obvious that DeAnna is more substance than flash, and that only increases her appeal. Confidence radiates from her, as well as a noticeable aura of self respect and honesty. As a mentor to new artist Calyssa, DeAnna Dawn wrote multiple songs for Calyssa's up and coming project. On DeAnna's album, the song "What R U Waitin 4?", is a personal favorite of mine, with smooth music and soothing lyrics. I honestly listened to it 20 times in a row, and I would do it again. Bottom line, DeAnna Dawn is already a major entertainment force, and she's ready to show the world all her talents in a major way.

Interview with DeAnna Dawn, "Ruby" by
Snow: Hello, good morning to you.DeAnna Dawn: Greetings to you!Snow: First off, let me say thank you again. I really appreciate you taking time out to do this.DeAnna Dawn: It's my pleasure!Snow:...
Shadow and Act recommends "The Next Day" by MsWOO
http://shar.es/X1yPa
The Next Day: Locs Take Center Stage by Gail Mitchell
http://www.locdlife.com/nextday.html
The Interview: When Dawn Breaks by Monique Spate
http://www.associatedcontent.com/article/8033029/the_interview_when_dawn_breaks.htmlI love music. I love music that makes you feel good, makes you think and takes you outside of yourself -- makes...
p
A
n
E
F
Song Title by Artist Name
987654d
LM
iAnEAqqqq