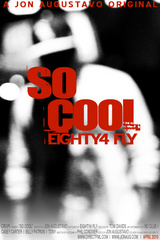 It was around age 12 when Eighty4 Fly, aka Devon Taylor, started making music. He followed the example of a handful of brothers and cousins who rapped recreationally, but in reality music has been near omnipresent since his early childhood. With grandparents singing in the church, a vocalist sister and a cousin, NoClue, who holds the Guinness Record as the fastest rapper in the world, it’s arguable that musical talent runs in the family—Eighty4 Fly just picked it up.

Eighty4 Fly was born and raised in Seattle, from his early days in the south end’s Rainier Vista to formative years in the north end that followed a move with his mother at age 9. He started out recording from one tape deck to another, then upgraded to so-called studios in friends basements. The first time he ever got in a real studio, the budding emcee was 16 years old and ended up in a booth with West Coast producer Funk Daddy (Sir Mix-a-Lot, E-40).

But after putting out a single short project, Eighty4 Fly was incarcerated and spent 2002-2005 behind bars. He doesn’t advertise that fact, nor use it as a claim to some sort of gangsta street cred; instead, it was a chance for a hardheaded kid to read, soul search and reinvent himself. As counterintuitive as it might sound, the experience was a good one. Instead of choosing to come out the same person, he took the time reflect and learn as much as he possibly could.

After his release, real life superseded rap life; music wasn’t, and couldn’t be, the focal point of his life anymore, and though he continued rapping (then under stage name SK) the art was pushed to a back burner.

But recently, quickly, that all changed. In April, he again changed his stage name to Eighty4 Fly and traveled to Las Vegas to film what would become his breakthrough music videos, “So Cool” and “Like Planes,” with prolific Seattle expat Jon Augustavo. He followed those with an eight-track freeEP titled The Eighty4 Fly Project, culled from more than 20 songs he originally slotted for his debut full length, and a mixtape hosted by KUBE’s DJ B-Mello, 1st Class ’N Flyworld, is due out in the near future. The forthcoming debut full length No Flight Home is scheduled for a release in early 2011.

Listening to everything from The Fray to Crystal Castles, Eighty4 Fly doesn’t look to typical hip-hop influences. But then again, he isn’t about to be tied down by the term “rapper.” He’s an artist, a rock star trapped in a hip-hop artist’s body, one who appreciates the freedom of electronica and focuses on his songs’ construction before all else. Eighty4 Fly doesn’t have one distinct sound, and if he can help it never will; somehow, he evades limiting categorizations while striking a cohesive balance.

Just like every other emcee in Seattle, Eighty4 Fly is aiming to become the flagship of Seattle’s hip-hop renaissance. But unlike most of his townsfolk, he isn’t just making music for Seattle—it’s for everybody. There’s nothing local about what he’s doing.

Cake & Ice Cream w/ Eighty4 Fly by
You having a good time? Here, try some of this," Eighty4 Fly shouts over the din of a packed party and the bass-heavy speakers blasting his debut single "So Cool." Reaching across the chocolate...
p
A
n
E
F
Song Title by Artist Name
987654d
LM
iAnEAqqqq