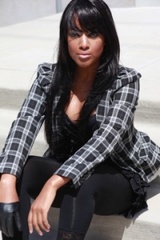 INTRODUCING: ELISE 5000 Born and raised in the city of Warner Robins, GA, Elise 5000 is an aspiring ray of light for the music industry. Elise 5000 is multi-talented and thrives to share her passion to write, produce, and record music that will touch the spirit of the soul and keep people longing for her next project. The Next Best Thing is here…NOW…and it is Elise 5000. Feel the pulse. Move to the surge…of Elise 5000.

Elise 5000 Another Summer Hit? by
Feel the Electricity with Elise 5000's "STAR"Usually there is that one summer hit from that one artist that you play over and over all summer. It becomes your summer anthem. Well, Elise 5000 is...
Elise 5000 Interview with Madame C by
Elise 5000 gives an indepth interview with Madame C noted music journalist. If you want to know who Elise 5000 really is, check this out!
Elise 5000 Is Featured on DatPiff mixtape!!! by
If you love mixtapes then you need to DOWNLOAD this one for free! It features music by Latoya Luckett, Shonie, Keri Hilson, and more....
Elise 5000's Toya's World Feature! by
Do read this compelling feature on the rise of Elise 5000!
Arjan Writes about LnM Projekt Featuring Elise!!! by
FREE DOWNLOAD LINK : http://www.limelinx.com/files/4bbcf09f8375c51513c5de4130686219 Elise 5000/LnM ProjektFeaturing Ill Trill Neil"Watching Me Move" Funky House (Radio Edit) DOWNLOAD LINK : ...
Elise 5000 interview with Blackbeats.FM by
Germany's #1 for black music interviews Elise 5000 about her life, her music and her feelings about the world!
Arjan Writes about Elise 5000's "Star" by
EXCLUSIVE INTERVIEW: IAMJoJo Interview Elise 5000: by Today IAMJoJo’s Editor, Joy Thacker had a quick ch
Over the past couple of years, Elise 5000 has been featured on various music blogs ranging from TheStreetTreatment, UrbanMusicDaily, PagePip and more.Unlike many of the mainstream artists in the...
p
A
n
E
F
Song Title by Artist Name
987654d
LM
iAnEAqqqq