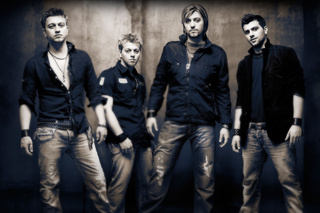 Call them brothers in arms. Toronto-based band Fairchild comprise four brothers in their 20’s, and they’re united not just genetically but in a creative quest to create compelling modern rock. These 4 brothers are definitely ready for prime time. Their debut single, “Dare To Believe,” made serious believers out of Canadian radio, getting added on MaxTrax Rock and Galaxie Rock out of the box, then charting on Rock Radio, Top 40 and Hot AC formats. The track fared superbly in showdown competitions, reigning supreme for four nights on K945 Moncton and for five on Z103.5’s “Head2Head. (the latter retired DTB as an exceptional “Hall Of Fame”’er!) Beating the likes of huge international buzz stars like Jamie Fox/ T-Pain, Mariah Carey, The Ting Tings, amongst others. Jeff explains that Fairchild’s creative process involves “getting together, practicing, and coming up with riffs and ideas. The base of the song will come, then I’ll come up with a melody and lyrics around that. I base the songs on the emotion of the music that comes first, and my whole thing as a songwriter is to make emotions tangible.” Mission accomplished! As this is exactly what Fairchild has done in DTB, for example “I’ll Take You” the bands second single off the album is definitely one of many crowd-pleasers at Fairchild gigs, while Chad Kroeger of Nickelback (a key influence on the band) was reportedly observed enjoying the song at a recent showcase. The tight musicianship featured on this song and throughout Fairchild’s first album, Dare To Believe, should come as no surprise. You see, Fairchild is literally a band of brothers, comprising four siblings (Jeff, Phill, David and Donny Smith) in their 20s. Over the past four years, the four brothers have played hundreds of gigs in Ontario schools, as part of a safe schools initiative sponsored by a non-profit organization, and now, with a brand new album do to be released in late 2010 they’re poised to take another major leap forward. Facebook: www.facebook.com/fairchildrocks Myspace: www.myspace.com/fairchildrocks