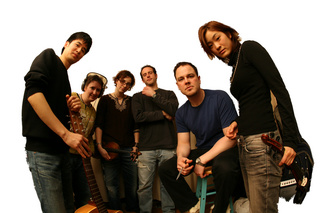 Fatblueman, live from Japan, is a band made of Japanese, Canadians, Americans, Australians, and whatever else happens by. Notorious for their genre-jumping, they are envied for being able to make lots of different sounds come together, and play even.

They are very likely the best band ever. Anywhere.

Gaijin Sounds 2008 by Japanzine
Track 3: Fatblueman: Couldn't Get the GirlFatblueman is a constantly evolving musical collective, described by singer John Janzen (with typically self-deprecating humor) as, "essentially me and any...
p
A
n
E
F
Song Title by Artist Name
987654d
LM
iAnEAqqqq