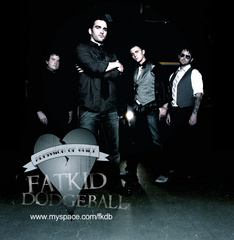 It isn't rare for a young band to set out to make great music with honest intentions and a love for what they are doing, but it isn't often that a young band gets past the struggles, fights, and tireless hours on the road to become what they set out to be. Originally formed in 2001, Columbus Ohio based, Fatkid Dodgeball blends classic electric guitar leads with strong acoustic riffs and rhythms over a beefy bottom end. Their vocal harmonies and dynamics give FKDB a characteristic sound all their own. FKDB has generated a buzz throughout the music industry, through performances opening for Fall Out Boy, Safety Suit, +44, The Academy Is, and appearances on MTV's smash hit Laguna Beach, MTV2's On The Rise and as the only unsigned artist to appear on the new Coast2Coast ROCK Mixtape featuring Green Day, Paramore, Cobra Starship, The Killers & others. Their latest single FAVORITE FIX is getting early DJ support on Sirius, commercial and internet stations worldwide. Currently, Fatkid Dodgeball can be seen all over the Midwest & East visiting local radio stations, playing various bars, clubs and college campuses. Their full band live shows combine energy, sweat, and great music, which keep crowds coming back. FKDB is also a local favorite as a live acoustic act most recently appearing in studio at Columbus' own Radio 106.7 (Catch a LIVE in studio performance in the links section under Personal Site #2). FKDB recently won Stereofame.com’s 2009 Artist of the Year (see YouTube link for EPK) and is featured among the top 5 regional acts on MTV2. They have logged serious miles, building a strong following across Ohio, Pennsylvania, New York and beyond. This growing, loyal following knows what many will soon; Fatkid Dodgeball have only just begun.

Stereofame 2010 Artist of the Year - Fatkid Dodgeball by Dennis
The boys from Fatkid Dodgeball know a thing or two about hard work. In fact, the Columbus, OH quartet seem to embody the working class mentality of their blue-collar hometown. Even the names of the...
FATKID DODGEBALL - HOT TOPIC IN STORE PERFORMANCE DATES ANNOUNCED! by AP Wire
FATKID DODGEBALL, WINNERS OF STEREOFAME BAND OF THE YEAR 2009 WILL BE EMBARKING ON THEIR SUMMER/FALL IN STORE JUNKET FOR HOT TOPIC AT A MALL NEAR YOU STARTING IN MAY. THEY WILL BE PROMOTING THEIR...
p
A
n
E
F
Song Title by Artist Name
987654d
LM
iAnEAqqqq