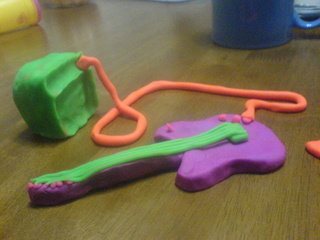 I've been a musician for over 16 years and have jammed with many, many great players all over the southeast. I have also sat in on several occasions with bands like Moonshine Still, Granpa's Cough Medicine, Troubadours of Divine Bliss, Gove Scrivenor, Uncle John's Band, Ancient Harmony and The Codetalkers! Sit-in's in my bands include members of the Duhks, Afromotive, Middle Rhythm Session, Gerry Williams Band, Swamp Logic, The Freighthoppers, Brother Fatback, and the Wildlife Refugees plus Bobby Lee Rodgers, Larry Keel, Josh Pinkham, Rev. Jeff Mozier and many other awesome musicians! I play guitars, mandolins, octave mandolins, banjos, fiddles, hand drums, didgeridoos, basses and jaw harps. I have 5 projects going now including acoustic rock with a splash of mountain funk on guitar with Shane Meade, newgrass on the mandolin with the Pickford Sundries, alternative hip hop/R&B on bass with Bishop Wayne, my own band Friends of Fil which is all original instrumental rock fusion leaning toward the dance. Oh, and always working on my solo act with my loop station and sitting in with jazz bands with my mandolin! I'm into virtuosic music with a lean toward jazz fusion, southern rock, Jazz/Latin jazz, Bluegrass and good old funk, as well as world music including Indian Classical, Celtic, Reggae, French Gypsy or anything that is inventive and full of energy and soul within any genre. I live in Tampa, Florida right now and travel all over the place to play. Good times, good times.

Pickford Sundries on WMNF Tampa 88.5 by
We played a Friday Music Showcase hosted by Bill Dudley. This show had a great feeling and we had a blast in a nice new studio! Check our website, pickfordsundries.com then go to the music and...
Pickford Sundries at Friday Extra Concert Series by
This was a large outdoor concert near Lowry Park Zoo in Tampa that was recorded for the local TV station Channel 16 and was run once a month all year! They still slip it in there from time to time!...
Shane and Fil Studio 10 morning Show CBS by
We went in one morning and played a couple of tunes for the masses. They did an excellent job filming us! We were stoked! Check it out at ...
Pickford Sundries Studio 10 CBS by
I took the bluegrass band back into the TV studio for another morning show. We had a great time and the staff loved it! We wanted to shoot in front of the weather screen but it was apparently...