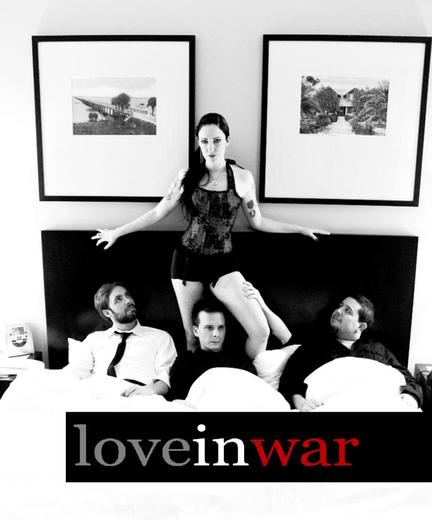 Love In War is the electronic rock project founded by keyboardist/programmer, vocalist and all-around tech goddess Kate Flanigan. Simultaneously electronic and organic, epic yet intensely personal, Love In War is a most beautiful contradiction.

Spend a few minutes talking with Kate Flanigan, founder, front-woman, and primary writing force behind electro-art rockers, Love in War, and it quickly becomes obvious that this is much more to her than just a band. She prefers the term “project” to eliminate any preconceptions that the word “band” might bring to the table. Love in War does not exist in a world of expectations or limitations. It is an artistic statement, and the musical and visual summation of Flanigan’s life experience


The project started humbly enough, in Flanigan’s bedroom, with a laptop and a catalog of unfinished demos left over from a decade of formative bands. As she poured over the ideas, it became obvious that the material needed a vehicle for release, and Love in War, the solo project, was born. The songs were patiently fleshed out with a combination of organic, acoustic instrumentation and electronic loops, hinting at a new direction that would later come to define her sound. Some of these early demos fell into the hands of producer, Michael Seifert. Impressed with her songwriting and powerful voice, Seifert invited Flanigan to record the songs at his Ante Up Audio studios in Ohio. Armed with a brutally honest and deeply emotional batch of material, and free from the shackles of a conventional rock band, Flanigan dove deep into electronic experimentation. The goal of the Ante Up sessions was to capture the songs in complex arrangements, using non-traditional instrumentation and recording techniques, without sacrificing the song-craft at the heart of her music. The result is an album that brushes up against the limits of pop music, while exposing a disarmingly sincere vulnerabilit

Although Love in War has existed as a concept for years, the live incarnation of the project debuted with an arena showcase performance in July, after only a few weeks of preparation. Since then, the band has been holed up in a south Florida rehearsal studio, emerging rarely to test material on the live stage before disappearing back into their creative laboratory. Behind closed doors, they are busy deconstructing an album’s worth of densely textured electronic tracks and rebuilding them into sprawling rock epics, simultaneously crushing and ethereal

When asked to describe what the music means to her, Flanigan answers almost without thinking. “My songs are definitely all about things I have been through and experienced. However, I hope anyone who listens to the songs gets whatever they need out of them. If you can see yourself in there, even if it’s not for the same reason I intended, then I have achieved my goal. There are records that people listen to, and they feel that these songs could have been written about them. They feel better, and maybe not so alone or crazy…I want these songs to be that catharsis for someone else.”

DRUMS: We will provide

Zildjian A-Custom Cymbals and all hardware will also be provided by us.

BASS:  We will provide

Guitar:  We will provide

Electronics Cabinet: We will Provide

Vocals: We will provide

Main Vocals XLR from FOH to be connected to the wireless receiver within the electronics cabinet.

Misc: We Will Provide

What will be required by Venue:

Drummer is running sampler trigger pads and runs to 2 XLR outs to Front of house.

Artist of the day: Love In War by Love In War hail from Fort Myers.
Love In War may hail from Fort Myers. But this weekend's trip to Tampa has been long in the works. No lie, this has been the gig we have been most excited about for months," singer-keyboardist Kate...
Spot Magazine Awards honor local favorites by CAPE CORAL, Fla. - It was a night of recognition
CAPE CORAL, Fla. - It was a night of recognition and celebration for Southwest Florida's local businesses and musicians. Spot magazine and the Dixie Roadhouse in downtown Cape Coral came together...
Experience This by Love in War, Love in War Album Review
Please click the link to view the article