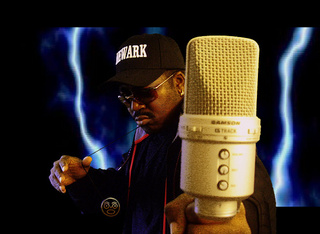 Born ( Derek simmons,march,28. 1963 ) gee rock had a natural gift for the music genres, at an early age he embraced the funky sounds of the 70’s with groups like parliament,funkadelic,james brown, kool & the gang….etc, once he became a teen, gee was sent to los angeles,c.a. to attend a private school with a cousin For a year & a half he primarily embraced his first form of hip hop in 1978 through a form of dance called pop locking, and later robotic techniques, after a year later (1979) he returned to his native town of plainfield,nj To ultimately find out that he was moving to Newark,nj, thus beginning his true hip hop roots. Dee jaying, and then emceeing,and producing at the same time, even later came graffiti and break dancing Excelling in all of these elements, gee rock became a innovative force in the hip hop culture, and has since Accumulated many accolades and has had worked with many of hip hop’s veterans with the likes of: 45 king, lakim shabazz, naughty by nature, chill rob g, mr. funky (lords of the underground), reggie reg (the legendary crash crew ), dotta rock ( fantasic five ), waterbed kev (L brothers, fantastic five,)dj baron, Rodney c (funky four +1 ), tame one (artifacts ), Percee P( the rhyme inspector)….etc. and has formed his own production company and label called : “Force One Networkz” in which he has produced over 10 artists of his own, for about 20 years….if that was not enough for gee, he has also dabbed into film making as well with about 4 films to his credit…. he has also penetrated the radio industry with the ultimate duty of Carting the songs on the legendary 105.9 f.m.W.N.W.K (formerly W.H.B.I.)for about a year. with a host of Associates in & around the hip hop circle, and 30 years of active duty, and an amazing 100 albums in production, gee rock & the cnd coalition has only just begun to make a lasting impression on the game !!!!

GEE ROCK & FORCE ONE NETWORKZ VOW TO BRING HIP HOP by NET FORCE PRESS
Derek Simmons aka Gee Rock & Tha CND Coalition: President and CEO of "FORCE ONE NETWORKZ" an up and coming Indie Recording Label,forsee a change in the rap game as we now know it, as he along...
p
A
n
E
F
Song Title by Artist Name
987654d
LM
iAnEAqqqq