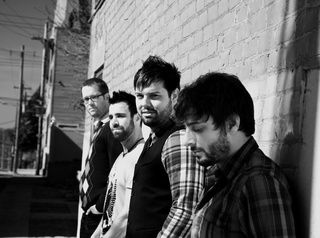 And Away They Go

We are a four-piece rock band from Indianapolis, Indiana. While we have played clubs and concert halls all over the Midwest, through the magic of the internet, sites like this, and fans like you, we've been able to share our music all over the world! Our sound is best-described as a combination of American-style, guitar-driven rock music with British pop-influenced vocal melodies. A few of our biggest influences are Ryan Adams & the Cardinals, the Foo Fighters, Oasis, Coldplay, and Bloc Party. We hope that you enjoy our music!

The World Through Different Eyes by Ricky Lee Potts
Since I saw them live a few weeks ago I haven’t been able to put their CD down. The disc it titled TheWorld Through Different Eyes, and it is filled with incredible tracks. From songs like...
Glass Halo: Champions of Birdy’s Rock the Circle C by Bryan Johnson
Combining inspiring lyrics, anthemic choruses, catchy pop structures, winding, driven guitars, and an excellent stage presence, Glass Halo iscurrently on top of the charts in Indianapolis. The band...
p
A
n
E
F
Song Title by Artist Name
987654d
LM
iAnEAqqqq