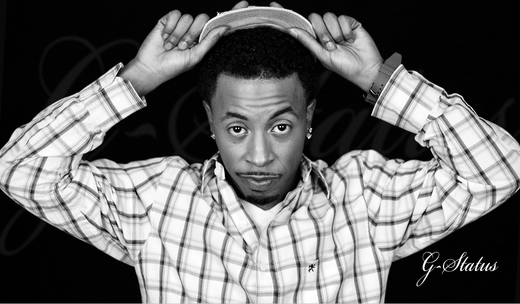 G-Status, born on December 16th, 1985 in Augusta, Georgia, is a unique individual.  The young man writes, produces, engineers and sings all of his work.  Growing up in the church, he realized that there was a calling on his life to sing and preach.  Rather than embracing it, he ran in the other direction, using his gift of singing and producing for the world, and totally disregarding anything that was spoken over his life regarding the Kingdom of God.  At the age of 16, G-Status, then Jason, started a singing group by the name of Ax’ent.  The group attained minor success through high school and some of college, only to be disbanded in the year of 2005.  At that time, being 20 years old, G-Status was offered a recording contract with a major label, only to be saved weeks later after receiving the contract.  At 21 years of age, he was faced with a decision.  Sign the contract and make millions or, take his chances with God.  By now, you know how that story unfolds.  Now in his mid 20’s, 6 gospel cds, 10 award nominations later, G-Status is traveling, singing and finally preaching the word of God.  In 2011, he started a record label, which is Kingdom Music Group, which consists of two groups from Atlanta, a rapper from Chicago, and three rappers from Texas.  The young man is sold out for God and looking to impact the lives as well as impart into the lives of anyone, any age, any race by encouraging people to get to know God for themselves by establishing a relationship with God first, then through his gift of music.

Success! by Twinn Loco
In a world of music which is easily taken advantage of one artist gives back more than he takes. His name… G-Status. G-Status is a refreshing change for the music industry and with that he brings...
Convert! by Joseph Williams
Before going to his album release party, I really wasn’t a big fan of Urban Gospel coming from a background of listening to jay-z, notorious big, and other major artist in hip-hop. During his...
3.5/5 Stars by Dasouth.com
When it comes to singers, there are several cities that seem to produce the majority of the best to put harmony to wax. One of those cities is Atlanta and J Stephens, bka G- Status, represents the...
p
A
n
E
F
Song Title by Artist Name
987654d
LM
iAnEAqqqq