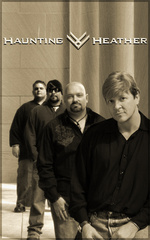 Formed in 2007, this quartet produces instantly likable rock music ranging from solid ballads, to danceable pop/rock, and powerful/emotional compositions that will move the listener in all directions. Comprised of Jim Rippee (vocals), Shaun Brening (guitars), Brad Moon (bass), and Michael Keller (drums/keys), Haunting Heather has created and released a debut album (“One”) that focuses on music that is likable and radio friendly.

"One" Review/Band Interview by Acuvi
Born in 2007, “One” album came out in 2010. And Jim Rippee (vocals), Shaun Brening (guitars), Brad Moon (bass), and Michael Keller’s (drums/keys) Haunting(ly) Heather is on.They’re a band that...
"One" Review by Branimir Lokner
Out of Kansas City area comes a four guys from band Haunting Heather. They were formed in 2007 year, and during the forthcoming period performed a lot, equally own materials and cover songs. During...
"One" Review by Wendy Adams
When you think Kansas City do you really think Rock / Pop music ? Well, maybe you should because the next BIG BAND is from there. They’ve reached #5 on the Rock charts for Kansas City, MO on...
"One" Review by Gabor Kleinbloesem
Straight from Kansas City, USA the band HAUNTING HEATHER sent me their CD ‘One’. An independently released quality record that sounds very impressive and combines a lot of music styles, although...
p
A
n
E
F
Song Title by Artist Name
987654d
LM
iAnEAqqqq