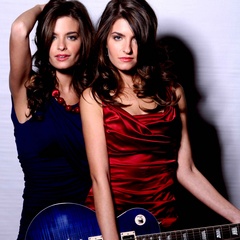 HelenaMaria is comprised of identical twin sisters, Helena and Maria Mehalis, born and raised in New Jersey. The girls started out playing piano at the age of four and later picked up the guitar in high school when songwriting came naturally. In 2006, Helena and Maria recorded their first album, “Serene,” consisting of all original material which can be found on iTunes. Their songs reflect their emotional, sincere, and playful sides while adding a distinct element of sophistication.

Their music has been featured in MTV’s “The Hills” and the upcoming movie, “In My Sleep” by Morning Star Pictures. They recently have been featured on the CW11 Morning News for their “Spotlight On” series. HelenaMaria also appeared on mtvU’s “Meet or Delete: Best Music on Campus” episode and were selected winners and have also performed for mtvU’s 2007 Campus Invasion Tour. Blending pop, rock, and emotion, HelenaMaria’s unique style is embellished with harmonies that define their sound. Although the girls may be identical in looks, skills on the piano, and guitar, they bring slightly disparate characteristics in voice and songwriting. Their cover is blown, however, when one girl picks up the guitar because Maria plays left-handed, and Helena plays right-handed. Continuously performing live, HelenaMaria is sure to put on a heartfelt and lively show.

by The Aquarian
The first song that I heard was a song called "Serene" which was the perfect pop song that was ready for Z100. The hook was great and the harmonies were unbelieveable." -Tim Louie
by D. Pagan Communications
“When performing, the stage is energized with their charisma while the audience is captivated by their enticing lyrics and sound.” -Joe DiBenedetto
by Jersey Beat
The sweet, thoughtful and emotional lyrics make an immediate beeline to your heart. Better still, there’s a genuine honesty and sincerity evident in the music, a definite love for life and music...