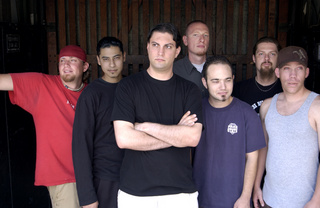 So what exactly is Hurly Burly music? Who knows, and who cares really. The only thing that matters is if it's fun and entertaining, which has been the main goal from day one.

Throughout the year 2000, Hurly Burly headed into Dog Run Studios, run by Eddie Casillas of the Voodoo Glow Skulls, to record their early demos: "The Mess We've Made" and "The Voodoo Sessions." As the band continued to write new songs and play endless gigs (including the most rockin' backyard BBQ parties their home town of Simi Valley had ever seen), they continued to draw a dedicated following.

Hurly Burly takes pride in not taking themselves too seriously — a major factor in the band's ability to create fun, good-time party music with no restrictions. So kick back with a few beers and have some laughs, we'll provide the music.

Hurly Burly's "Higher" finishes #2 in Punk by http://www.ourstage.com
Hurly Burly's "Higher" finished the month of January, 2009 at the #2 spot in OurStage's Punk/Ska/Psychobilly category. To view the complete standings, please visit ...
Hurly Burly Announces New Drummer by
Hurly Burly has announced that drummer James Garren has been added to the band's line up. Garren, who has previously played with Bad Acid Trip and Cabbage Nectar, takes over for departing drummer...