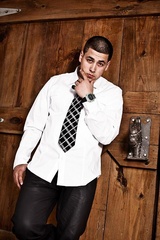 Born Oct. 5th 1988 in Rio De Janeiro, Brazil; raised in Houston, TX; and Austin, TX as his adopted home (Singer/Songwriter) Jon Ojeda better known as ‘Jonsense’ is quietly taking the R&B scene by storm. Working along side production teams like J.U.S.T.I.C.E. League, The Renegades… Etc. Jonsense has firmly placed his voice, and his pen as one of the top up and coming singer/songwriters in the industry.

‘IDOL' SENDS LOCALS TO HOLLYWOOD by
Six local residents have passed the audition.Corbin Chase, Scott Grimes, Jonathas Ojeda and Dominic Yanez of Austin will join Georgetown's Chase Dean and Courtney Nowell in Hollywood when Fox's...
a complete list of the ‘American Idol’ Las Vegas by
Hollywood Week wrapped up this week and 61 “American Idol” hopefuls are off to sing Beatles tunes in Las Vegas. It’s been hard trying to figure out who made it to the Top 50 (or 61) but we finally...
p
A
n
E
F
Song Title by Artist Name
987654d
LM
iAnEAqqqq