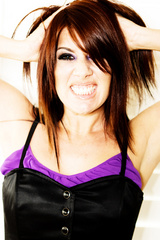 Music is my first language. In fact, I can't remember a time when music and I were not friends. Through song I have found expression, balance, and truth. I was raised in a blue collar steel town called Lorain, Ohio, but music has been my vehicle to experiencing the world. It is the vessel that placed me at Indiana University where I received my Bachelor's degree in Opera. After years of classical studies and dozens of operatic performances, I longed to create something that was truly my own, so in 2001, I moved to New York City with the intent on doing so.
Only ten days after my big move, I faced 9/11. Scared and alone in a war zone, I picked up my guitar and started to write -combining the technique I had learned from opera with the truths dwelling inside me- and technique I learned from Opera with the truths dwelling inside me- and it felt completely right. This led to two years of recording and performing with an East Coast band.
Mature, polished and yearning for sunshine, I decided to move to Los Angeles in 2003. Quickly, I was introduced to the Hollywood scene as I began singing back up for Kid Rock protégé Ty Stone (Atlantic Records). Ty taught me the ropes as we sang on stages I had once dreamed about. While singing with Ty, I also finished my first album, Bold and started to perform as a solo act. In LA, my band and I were fortunate enough to play legendary venues such as The Viper Room, The Whiskey a-go-go, The Knitting Factory, The Key Club and The House of Blues- just to name a few.
In 2005, I was hired as Danny Bonaduce's personal assistant and appeared on both seasons of the hit Vh1 series, Breaking Bonaduce, with him and his family. During the two year stint working for Danny and filming the show, I continued to write and perform, and several of my songs were licensed for TV and Film (Vh1, Mtv, and upcoming film: The Hipsters). I performed regularly with Gretchen Bonaduce's band, sang alongside great artists such as Terri Nunn (Berlin) and Vivian Campbell (Def Leppard), and absorbed first hand rock wisdom from the likes of Lemmy Kilmister (Motörhead), Bob Seeger, Alice Cooper, and C.C. Deville (Poison). My time with the Bonaduce's was truly an unforgettable adventure. This Spring I have plans to perform with Gretchen at Dinah Shore Week in Palm Springs.
Most recently, I released my sophomore album, Hollywood be thy name, which I am so very proud of. I have been featured in both Cleveland Magazine and The Cleveland Scene (along with Music Connection and Maverick magazines in LA and UK respectively). I also landed the cover of North Coast Voice Magazine in January 2009. My albums are available at Barnes and Noble and on iTunes. I am also fortunate to have the opportunity to give back to the music that has so charmed my life by teaching and directing young artists at the acclaimed Paul Green School of Rock. This winter, I was cast as the co-host of a new and exciting television talk show called The Richard Crawdaddy Show which often showcases my music.
I sing because it is all that I have known in this life. It is my way of making sure that my passion and my soul's voice do not die inside of me. When it comes to music, for me, there has never been a back up plan.