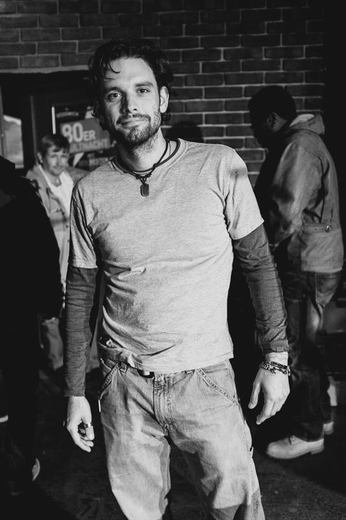 Bio:
Where do I begin? In the beginning? But that would mean that you would be sitting here reading a biography for days.

I guess I can start out with the first actual song I wrote, "Rhea". I love this song. You know, every musician has a few songs that they play and play all the time, and they hate it because it just got to old for them, but occassionally, there is this one song that sticks to them like glue. Rhea is my song. I was living in Glasgow, KY for a stint of time, when, while working at this restaurant, a saw some waitress with the most gorgeous blue eyes. I sure wasn't all over the girl herself (she was a sort of......rich, too rich,you get it?), but i was all over her eyes. So that's what that song is about, and inside of it, you can find out what type of life it was as well.

After I wrote Rhea, I went to Korea for a year, and from a second floor room, I wrote my heart out. I must have written about 100 songs from 1999 to 2000. It's funny though. I was supposed to be some guy who went to art school in Rhode Island, painting away in the form of Rembrandt or at least teaching it, but here I was trudging through the -60 degree F weather in Uijongbu, Korea, writing songs almost everyday about everthing I have seen, or what I might see in the future. Yup, that's the beginning. And it was a time of no mistakes, no worries, hell, no life as of yet. It was great.

Then we have the chapters filled with everyday life. I left Korea, I married in 2000, then went to Texas. She left me. Don't ask why. But what it did bring was another assault of midnight songwriting and tears. It's funny how the most depressing times of your life brings out the most of in time. Well, it would be obvious, but it still surprises me. I drank and smoked so much after my first wife left. And my pen was alive everynight. Some songs I wrote even scared the crap out of me, and I would resist the temptation to throw it away. But, as for musicians, our songs are our life. We throw it away, it's like throwing ourselves away.

I decided to get a jump start on my life after spending too much time sulking and drinking. I went to Germany, where I began to meet people who shared the same musical interest. I met my wife in 2003, who is a person with so much heart it might hurt her some day, but damn, it makes my life beautiful. I went to the desert sands of Babylon and Baghdad, where my thoughts ran wild with doubt, frustration and guilt. Many songs can come from those three emotions. In 2004, I met a great friend of mine, Rolando Torres, and we started playing in a new formed band called JaMaRo in Aschaffenburg. We struck gold that year. Actually, that was my best year yet!

Well, to sum it up, I had to leave Germany for school, came back in 2006, started a solo career, or what's left of it, had my third child (oh, i have three beautiful children, Lilian Malou, Jaslyn Jaden, and Jesse Jordan ^^), and am now on my way back to the sands again. It is amazing how time flies by. We must cherish everyday and try to make the best decisions possible. We must love the ones we care for, and forgive the ones we hate. That's life.

So, to you, reader, I say this one thing: Nothing's lost...you just can't find it yet. Take heart and hold yourself dear to you. Accomplish your dreams.

As for an update, well, life in the desert is good and bad at the same time. A few explosions a day makes you numb to fear, friends around you become closer and transparent, and (if your mind is open) the people here in Tikrit, Iraq are wonderful and very historically learned and proud. What I like most is hearing the prayers at 5 in the morning. I love history, and when the old, blind man sings through a sort-of raspy voice the "psalms" of the Quran, it takes me back to a year long forgotten. I tread the sands that the world has fought and died for for many, many, many years. It's amazing. It's sacred. It's mysterious. I am beginning to say, through all the pain and hurt that i have caused to so many people, through the blessing of my three children and supportive wife, through the people i have met everywhere around the world, and through my music which keeps me balanced, that I am finally able to call my life - good. Hope you can say that to.