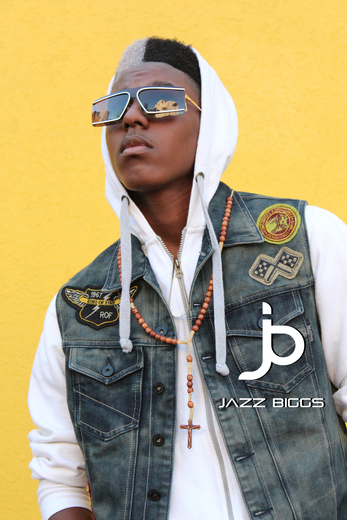 I was born for this... Jonathan  “Jazz”  Biggs  multi-talented actor, singer, songwriter, model and dancer, was born August 1, 1995 in West Palm Beach, Florida and now resides in metro area of Montebello, CA. The older of two, Biggs is a veteran in the pop/R&B game. At the age of two, the young singer was entertaining his Family and friends with the songs from the children   show   “Barney”.   He’s   lyrical   and   musical   talent   that   posses far beyond his years. He has great potential to become as great as his idols, like Ne-Yo, Chris Brown, Luther Van dross, and Stevie Wonder. What can you say about this great kid, Everything, Jonathan dedicates himself to what he truly enjoys and believes in.

"Giving up oneself to help someone else" is the slogan of his Non- profit organization, "Jazz's Friendz Foundation Inc. The CEO of this non-profit he stands by his mission, "Our mission is to promote the value of self-worth and instill a willingness to enjoy life in all children and adults. Our aim is to prove how investing in oneself with the inspiration of music will produce a responsible and   productive   citizen   of   our   society   “His   presentation   includes   musical and educational journey into Inner city schools, Children Hospitals, Retirement homes, Foster placements for children, and other Non-profit for children. JFF continues to use music as an important learning tool in multicultural communities.

He has vocal trained with the following trainers. At ages 6-7 he had privates with Mint-To-Sing in Atlanta, Georgia. At age 8- 9yrs old he had privates with Jan Smith in Atlanta Georgia. At 9- 10yrs old he was accepted at The Hollywood Pop Academy where Allissa Moreno in Hollywood, Ca. trained him. And at age 11yrs old he attended Macy Gray Academy where he was given a scholarship to be train by Roger Burnley in N. Hollywood, Ca. To enhance his skills and experience he was enter into shows, contests, and showcases.

Continue...
His started his career doing commercials and later compiled several film credits, church theater The Second Coming and the Impossible Dream, Professional theater, MEDEA Directed by Stefan Novinski. His film credits include: Bolden, the Great Observer, the Wool Cap with William H. Macy. His Television credits   included   a   pilot   episode   called   Cartoon   Friday,   ”Diary   of   a   single   mom”   director   by   Robert   Townsend,   Chocolate   News   on   Comedy central, Unfabulous on Nickelodeon, Girlfriends on Paramount/UPN, The Mentalist on CBS and various commercials. His Video credits "Side to Side" by Three-six Mafia, and "The Rainbow" by Vickie Winans.

Biggs currently attending LACHSA on the campus of CalState LA is involved in his Academics. In his spare time he enjoys Writing songs, swimming, and Social networking . At the age of seventeen , Biggs is spiritual and philosophical and frequently meditates on a scripture that state "he can do all things through Christ who strengthen him" He credits God, for all of his success and through the years to come, also he thanks his parents for their love and support.
"I'm living my destiny"