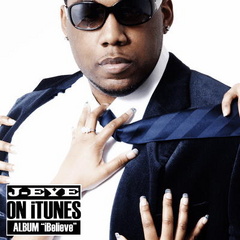 J-EYE ...A BROOKLYN Born Triple Threat, Un-Signed Super Producer Rising To The Top As ....ARTIST/PRODUCER/ WRITER. HOT Music PLUS A Dapper Image MULTIPLIED by tight production & hit song writing ability EQUALS a sure Multi-Million Dollar Deal, Right? Wrong! In today's music industry with sales down and illegal downloads on the rise, labels want artist to put their money where their mouth is. "Invest in yourself before we invest in you" is what they say, Artist/Song-Writer/Producer J-EyE has heard that song before and has vowed to reach the masses with or without major label assistance. Reported meetings with Interscope and Sony Execs as well as Keyshia Coles manager Manny Halley have all concluded with the same result, they all love the music but insist that J-EyE pop the record off himself.

With no substantial budget of his own J-EyE crossed paths with an investor who was down to ride or die for the music, and back the project 100%. Since acquiring financial backing J-EyE has released his debut album "iBelieve" independently on itunes and is set to continue to release quality music quarterly. "They gotta check it and respect it." He says. "Its only the beginning."

After spending a couple of months out in Miami working with super-producers Timbaland and DanjaHandz on an Interscope project yet to be released, J-EyE returned back home to Brooklyn New York with a mission. That mission was to create an undeniable project. With an ambitious and aggressive blend of Hip-Hop, R&B, and Pop, J-EYE's material will keep dance floors packed all night long and listeners anxious for more.

J-EYE INTERVIEW WITH YO! RAPS by
Check out the interview at www.yoraps.com in the NEXT 2 BLOW section.
J-EYE RELEASES DEBUT SINGLE “I GET AROUND” / MP3 by Skope Magazine
March 19, 2009.... Skope is here today to tell you about a rising Artist/Song-Writer/Producer who is starting to buzz in NYC and beyond. J-EyE has been doing his thing for several years, writing...
Urban Steez interview with J-Eye by Urban Steez
Urban Steez: Tell everybody your name and what area you represent?The name is J-EyE (pronounced jay-i) and I represent Brooklyn, NY.Urban Steez: How did you come up with your music name?J –Eye:...