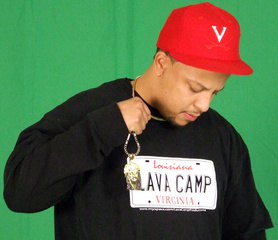 The man that would later become Jimmie Doughleone was born in the sticks of Virginia in the midst of talent. Learning early in life that all things are possible. He was always into music but never really took it serious until 03'. From the streets to the studio brought him and his partner "Rhythmic" together to form a tag team titled "S.Y.N.S" short for something ya never seen. Which later went on to form "LaVa Camp Productions". What started in a room with a Mic in a closet has lead to "Pure Precision Studio" what happens to be another notch under LaVa's BELT!!! Dough is just one amongst many in this cipher and since they click-clacked with Bink Now "EVERYTHANGGREEN"!!!

Who Is Jimmie Doughleone by N.U.T.T.Z Magazine
N.U.T.T'Z.: This your boy N.U.T.T'Z. back at it again. Right here with me we got a someone representing Lava Camp. What good how you doing let everybody know your name and where your from?...
p
A
n
E
F
Song Title by Artist Name
987654d
LM
iAnEAqqqq