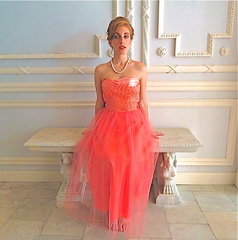 When you grow up rocked to Cuban Latino music, Beethoven, Bach, Orff, Coltrane, and Patsy Cline, you get a singer/songwriter like Juliana Fraioli, who began to play the piano at two years old and belted out her first original song at fourteen. Born in Providence, RI, Juliana comes from a musical family, her mother a singer and her father a guitarist. While she may travel to exotic places both in her life and in her music, her roots are in Rhode Island, and they are deep in melody and rhythm, making every one of her songs memorable and catchy. Juliana writes and sings songs which go right to the heart and stay in your head. She continually evolves, looking forward to a long musical career.

Juliana Fraioli to Appear on Fox's The Rhode Show by Samantha Turner
t's the day before recording starts on her performance for FOX Providence's "The Rhode Show" and, though it'll be her first musical television performance, Juliana Fraioli shows no signs of nerves...
Juliana Fraioli Poised at Edge of Stardom by James Merolla
For a singer whose career is just starting to gain national and international attention, it is ironic that Juliana Fraioli’s favorite place to sing is a place called “The Bitter End.” Fraioli, 25,...
Singer-Songwriter Duo Create New Sound by (Fox Providence)
Singer-songwriter duo create new sound Juliana and Alex Fraioli from South County Updated: Friday, 19 Nov 2010, 11:14 AM EST Published : Friday, 19 Nov 2010, 11:14 AM EST (FOX Providence) - A...
p
A
n
E
F
Song Title by Artist Name
987654d
LM
iAnEAqqqq