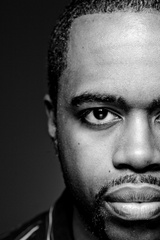 “I am HIP HOP” is not just the idiom that introduces the leadoff single from The Calm Before the Storm; it is quite possibly your answer to the question: Who is Khalil Ismail? But not that synthetic stuff manufactured in a plant somewhere by mad scientists looking to make a quick easy buck at your expense. Rather he’s the good stuff—the fruit for thought. He is “an organic alternative that’s good for your heart.” Khalil was born in Washington, D.C. to Islamic proselytes, but much of his childhood was cultivated in Baltimore, Maryland. Despite the typical experiences that come with being a less-than-middleclass Black man in an American inner city, his music doesn’t glorify a so-called journey of survival “on the mean streets” or paint the all-too-familiar picture of nearly every urban film and song; instead, you get what’s in the soul of an ordinary guy who just so happens to produce, write, and rap really well—quite frankly healthy music that uplifts, encourages, and inspires you all while keeping your head bobbin’. Back in ‘07, Khalil produced an EP dubbed The Truth, similarly motivated by his need to “feed.” The songs garnered some attention from industry folk and attracted calls for performances at venues and events, including the Global Peace and Unity Conference in London, England. Now, more polished and more poised in ‘09, and with an intentional effort to make an impression on the world through music, Khalil serves up The Calm Before the Storm, a fresh 17-track LP with diverse production and poetic lyrics making it pound-for-pound as good to you and as it is for you. “I want to be someone who people can relate to [and] who can entertain you… but has something else on his mind.” Outside of making music, Khalil reinforces his messages by actually going to his audience, particularly the youth, as a potential example and role model, sharing his experiences and showing them that it’s okay to be a decent human being. His goal is to be the change that he wants to see, and to show that Hip Hop has more to offer than just “junk” food.

November 2009 Converse "Get Out of the Garage" URBAN