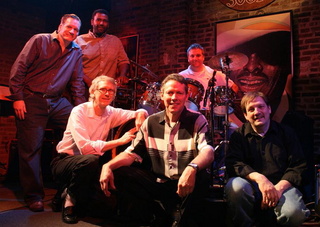 When blues veteran and Kingdom Brothers’ founder Bob Walther formed the group in 2005, he wanted to do something really different on the St. Louis music scene. “What you will not hear in our set list is ‘Sweet Home Chicago’ and ‘Rock Me Baby’,” says Walther. “Both are fine songs but can be heard seven nights a week in every blues club in the area. Instead, we cover our favorite cuts by the blues greats – Otis Rush, Freddie and Albert King, Bernard Allison, Guitar Shorty…to name only a few.” A fresh approach was a bit risky but has paid huge dividends for the band. Also featured in Kingdom Brothers’ set list are traditional gospel/blues numbers made popular by groups like The Blind Boys of Alabama. And Kingdom Brothers’ original songs, which include the title track from the band’s 2008 CD release Shine a Light, continue to win listeners over as well. Notable local Kingdom Brothers’ events have included a TV appearance on KNLC Channel 24; a July 4th ‘08 main stage performance in Granite City before an estimated crowd of five-thousand; two very successful nights at BB's Jazz, Blues and Soups; and a recent blow-out show at Harrah's Casino. The line up of lead guitarist Ron Roskowske, vocalist Tom Wilson and bassist Walther have logged a combined one-hundred-five years of major blues performances. Roskowske, easily recognized for his high-intensity electric leads and smooth bottle-neck slide solos, is just as comfortable accompanying Wilson’s soulful vocals with some tasteful flat-top work, a la Robert Johnson. And Walther spent years alongside the piano legend Johnnie Johnson. Stan Gill, a veteran keyboardist and formerly the stage manager for a major label, singing songwriter/guitarist Chris Shepherd, and award-winning drummer JR Payne round out the group. Shine a Light is receiving FM radio play on four continents and has received excellent reviews here in the U.S. and in Europe. Kingdom Brothers continues to be a major crowd draw in St. Louis as they expand their listener base beyond just hardcore blues fans.

Kingdom Brothers by Ron, Rootstime Belgium
(translated from the Dutch) This blues band from Saint Louis, is not an ordinary blues band. They use, as it happens, the devil’s music to spread the message. You see it already if you undertake...
Kingdom Brothers – Shine A Light by Peter 'Cornbread' Cohen, CBP
I’m at the crossroads again. About nine years ago I was in LA, went to B.B. King’s and caught “Brothers N’ Blues”. I remember being blown away as I listened to a Christian based blues band, and...
p
A
n
E
F
Song Title by Artist Name
987654d
LM
iAnEAqqqq