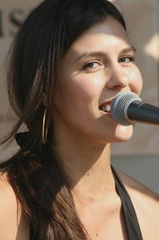 Hey everyone!! I am a singer songwriter from New Orleans. A lot of my early influences are from my dad (who can play a New Orleans piano like the best of them.) I had a regular gig on 6th Street in Austin when I was in school there. I got quite a little following then but headed off to Los Angeles where the music scene is quite different. I have had a Los Angeles Music Award nomination, won the Alberto VO5 Red hot rising star contest in 2006. With those winnings I made my latest self titiled EP "Lauren Barrett." This past January I played at the Blue Bird Cafe in Nashville and have been writing country feverishly since then. I came back to Nashville a couple of times since then to cowrite with some great people.
I just finished a 9 city tour that ran through Texas and Louisiana.

Since Hurricane Katrina I had been trying to get back to New Orleans. It was great to play in my hometown again. Looks like I might actually be starring in an indie movie, "Oblivious," that will be shot in Atlanta and New Orleans this summer. I am hoping to place some songs in the sound track. I will be uploading more stuff soon.

Let me know what you think of them.