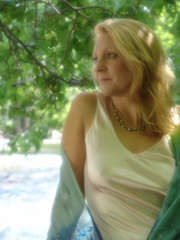 Some serious, searing, and sassy jazz fronted by the talented Ms. Bell, whose voice can soothe like butter, ache with pain, and rouse the troops." Keyboard magazine

Like a breeze on a summer day, contemporary jazz provides a respite from life's complications. Lisa Bell wafts cool with the best of them, but keeps us from permanently drifting into the stratosphere with charming doses of wit and spice.

While the theme of Lisa Bell's second album, released in 2005, may be familiar (IT'S ALL ABOUT LOVE), her style shows she is one of the new breed of female jazz singers doing it her way. You know it's a new era for jazz singers when you hear Lisa because she writes much of her own material, mixes in influences from roots rock, pop music and Broadway, and crafts compelling modern arrangements that alternate between trumpet and sax on some tunes and non-traditional jazz instruments such as dobro and pedal steel on others. She even adds a real string quartet on one song. Her contemporary eclecticism is fully in evidence on her latest recording as well as during her unique live performances. A music video of the title track is currently airing across the country aboard Frontier Airlines.

Bell, a Boulder, Colo. native, grew up singing jazz from the time she was six-years-old. Lisa's earliest musical inspiration came from two concerts (Dionne Warwick and Ella Fitzgerald) she saw when she was six-years-old. Soon the youngster was standing on her fireplace hearth giving concerts for her family based on records she heard around the house by Ella, Carmen McRae, the 5th Dimension, Burt Bacharach, Karen Carpenter and Chicago. As a teenager, Lisa fell in love with jazz after being selected for the 24-person, top high school jazz choral group whose repertoire included tunes by Manhattan Transfer and Lambert, Hendricks and Ross.

A scholarship led her to the Conservatory of Music at the University of Missouri-Kansas City where she got a B.A. degree in Vocal Performance. In Kansas City, Bell sang backing vocals in concert for Bobby McFerrin, Marilyn May and Ida McBeth, among others. In addition, Lisa began doing extensive studio session work, especially jingles for local radio commercials that she often co-wrote in the studio before singing them.

Bell began studying jazz seriously again in 2000. After singing jazz standards on a regular basis, she began coming up with significantly different arrangements for classics ranging from "Summertime" to "Black Coffee." She captured these songs (and one original tune) on her first album, DARE TO BE…, which featured special guest Nelson Rangell. Soon Lisa was performing at jazz clubs throughout Colorado and at major festivals such as the Cherry Creek Arts Festival, Taste of Colorado and as the opening act for the 2004 JVC Winter Park Jazz Festival. She was featured as the opening act for Stanley Jordan in 2005 & 2007, and has even joined with Denver’s smooth jazz radio station CD104 for “Jazz On The Tracks” performances aboard a special Amtrak train touring through the Rocky Mountains.