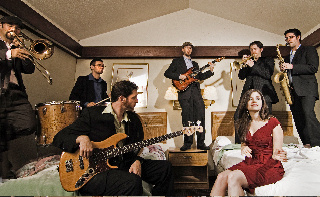 22-year-old composer and vocalist Leah Randazzo is a naturally gifted performer of uncommon charisma who knows how to bring an audience to its feet with her powerful voice and high-energy stage performance. Her original songs, described as jazz-infused R&B and funk, are sophisticated and soulful compositions that belie her young age. The Leah Randazzo Group, a septet that includes vocals, rhythm section, and horns, formed in the spring of 2005 and has been playing throughout the northeast since, including opening for Grammy winner Judy Collins. Leah's stunning debut album "At the Root," produced by Michael Gregory, has been characterized as having a sound that doesn't pigeonhole itself stylistically; musically it's as dynamic and fluid as Randazzo's voice, (Play Magazine).

"At their most boisterous - as on the brash "My Weapon" - the band's songs are highly danceable and colored with punchy horn lines. At their most sensitive as on the piano and string-laced Morning Song - they blow the work of Starbucks divas like Norah Jones out of the water."
- Nick R. Scalia, Play Magazine, New Haven, CT

"She's a sultry, charismatic 22-year-old big-voiced singer and keyboard player from small-town New England whose music is powered by heavy doses of jazz and rhythm-and-blues...Her new album, "At the Root," pulls on your dancing shoes for you with the fluid mid-tempo groove of "All I Need In You," then stops you dead in your tracks with the turn-the-lights-out jazz ballad "Turns to Grey."
- Brent Hallenbeck, Burlington Free Press, Burlington, VT

"Leah Randazzo came through with her band and they straight killed it."
-Justin Strong, 7thmovement, Inc., Pittsburgh, PA