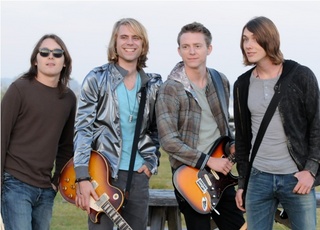 Loomis and the Lust

Embracing classic pop hooks, throwing in a bit of soul, Brit pop and California sunshine, Loomis & the Lust has created a top notch pop rock sound that swirls with a light-hearted, fun-time attitude that conjures up visions of palm trees and good times. After releasing a batch of clever, catchy songs in their first EP last year, Loomis and the Lust quickly started making waves, being named one of the “Top 25 New Bands in the Word” by MTV Iggy, winning an MTVU “Freshman” video award, appearing in an online ad campaign for Subway. All their songs are danceable and contain so much energy that if you don’t move a body part while listening, you most likely don’t have a pulse. “I’ll put it to you this way, within about thirty seconds you’ll be reeled in and singing into a hairbrush”, wrote one reviewer about the band’s single "Bright Red Chords”. They have been described as taking the best parts of rock & roll from the past, adding a little funk, a little Cali surf and molded it into something modern that still captures that same feeling as listening to Beatles or the Rolling Stones for the first time. The band is currently writing a popular blog for MTV Iggy. They live in a house that doubles as their studio in Santa Barbara, writing new songs constantly when not on tour. Most recently their tenacity paid off to the tune of a $25,000 prize via OurStage.com and the New Music Seminar, winning the coveted title of "Artist on the Verge”. Critics praise the band’s “top shelf music that should make the band a household name” in the near future. “Loomis and the Lust obviously perceives—and possesses—the recipe for colossal success."

Feature on OurStage Radio in Winamp

November 2009 Converse "Get Out of the Garage" ROCK

Loomis & the Lust's Nagasha by The Ripple Effect
“It’s called Nagasha and it flat out moves! The music is packed with a great mixture of distorted and clean toned guitars, solid drum work and in-the-pocket bass groove, and melodic vocals that...
Review: Loomis and the Lust Nagasha EP by Wildy’s World
Santa Barbara, California is home base for Loomis & The Lust, but after listening to their debut EP, Nagasha (July, 2009) I suspect they'll be spending a lot less time at home. With such...
Loomis & The Lust by Richie Friedman by Pen's Eye View
When you hear a band has a “catchy” tune – you expect to hear something… well, “expected”. Something with a great beat, a singable chorus, maybe both. Usually it’s rooted in pop sound – something...
Nagasha’ by Crystal Chang on Music Box by GreenShoelace.com
Loomis and the Lust’s debut EP Nagasha (now available on iTunes) may only be five songs and under fifteen minutes long, but that doesn’t stop it from being a damn good listen. The album’s opening...
Flak at Behind the Hype by Behind the Hype.com
Whilst plotting our next big to surprise the Ventura County with something fresh to work with, I conversed with my friend Kevin about a band he’s managing called Loomis and the Lust. Apparently the...
Viva La Mainstream! by Bright Red Chords -Loomis & the Lust
In the midst of a uncomfortably cold January I heard a refreshing dose of summer pop in the form of Loomis & The Lust. Their debut EP Nagasha came out back in July, but it evaded my ears till...
p
A
n
E
F
Song Title by Artist Name
987654d
LM
iAnEAqqqq