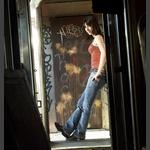 New Hampshire-born singer-songwriter Maria DeMaio has been performing since the age of three, when she belted out an impromptu version of Robert Palmer's "Bad Case of Loving You" from her car seat. She has since forged a name for herself in the fierce Boston music scene, winning over audiences at such staples as The Paradise Lounge and Harper's Ferry with her one-two punch of refreshing songwriting and a powerhouse voice that has been called both "soulful" (Boston Globe) and quietly scintillating" (SnapPop!). As frontwoman and songwriter of Maria DeMaio & the Fellas, she created in just two short years a raw and instantly recognizable sound that has set their act a head above the rest.

DeMaio fuses the artistic freedom of jazz, the power of soul, and the raw emotion of blues into a seamless blend that conjures shades of the top artists of the past 30 years. She combines her profoundly emotional delivery with intensely personal songwriting that is steeped in intent and sincerity. With songs that are as catchy as they are clever, Maria demonstrates that pop can break free of its cookie cutter roots. And backed by an ever-increasing fan base, she is well on her way to showing us just how far her sound can go.

Winner: Song of the Year by
Maria' "Depth of Me" won the month of January in the Internationally acclaimed songwriting competition Song of the Year. Judges included Grammy Award winners, reps from Rolling Stone Magazine, ABC...
Radio 92.9 Local Band of the Week by
Radio 92.9FM has picked Maria DeMaio & The Fellas to be their local band of the week. The Greater Media radio station is playing clips of Maria's song "Eleanor" on air and offering it as a free...
WFNX Quote by Keith Dakin, Music Director
Combining the best elements of Norah Jones, Tori Amos, and Sarah McLachlan... Maria DeMaio proves herself quite the frontwoman.
Top 25 CDs of the Summer by Wildy's World
Based in the deep Boston music scene, Maria DeMaio & The Fellas have built quite a following in the past two years. She has been featured on XM Radios' XMU Unsigned and radio station WERS in...