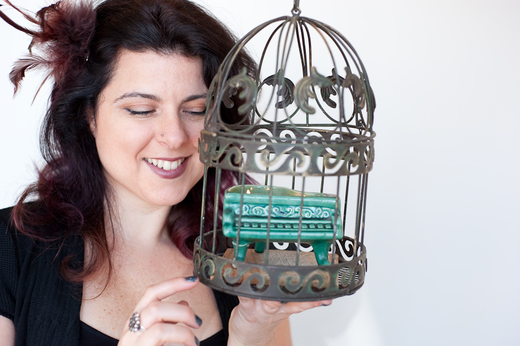 Female-fronted piano-based music described as “somewhere between Kate Bush and Leonard Cohen” (San Diego Downtown News) with “otherworldly” vocals that “can hold your attention whatever she is singing” (North County Times).

Marie Haddad started playing piano at the age of 5 but quit formal training at 11 because her attention span required constant breaks for cartwheels.

After having to sell her piano in college, she missed playing so much that she would regularly sneak into a well-known San Diego hotel in the middle of the night to practice on the grand in their main ballroom. Soon, the cleaning staff started to recognize her.

After playing in various San Diego bands (everything from a mall houseband to a Xanadu cover project), she joined 12 piece 60’s soul outfit the San Diego Beat Organization. The group was nominated as Best New Band at the 2002 San Diego Music Awards but disbanded shortly thereafter.

It was only then that Haddad finally began publically peforming her own songs. Soon drummer Nas Helewa and bassist Jason Hee joined the equation. Together they released Haddad’s debut CD ‘A Beautiful Road’ in 2006.

Marie Haddad was honored with a nominations at the 2007, 2009, and 2011 San Diego Music Awards as Best Acoustic Act in San Diego. Currently she is at work on music for her next CD.
- Adam Gimbel (San Diego City Beat)

Haddad's Piano Magic Striking a Chord by Bart Mendoza, Peninsula Beacon News
While there are numerous singer/songwriters in San Diego who perform with a guitar, far fewer can be found playing the piano. Logistics alone prevent all but the hardiest musician from carrying...
Coming Into Her Own: Marie Haddad Finds Her Future Between the Piano Keys by Kate Kowsh, San Diego Troubadour
In the three years since San Diego singer-songwriter Marie Haddad first wrestled stage fright to debut at Lestat's, she's had the chance to scratch a few things off her musical to-do list. Having...
Musician Interviews: Marie Haddad - Still Floating by Jay Allen Sanford, San Diego Reader
Singer-songwriter Marie Haddad was five when she started playing piano, but she drifted into other endeavors a few years later. At one point she had to sell her piano in order to stay in college. “...
Album Reviews: Marie Haddad - 'A Beautiful Road' CD by Jim Trageser, North County Times
A Beautiful Road" Marie Haddad mariehaddad.com San Diego's Marie Haddad has an ethereal, otherworldly voice that could take her into the outer stylistic orbits of an Enya or Stevie Nicks. But...
p
A
n
E
F
Song Title by Artist Name
987654d
LM
iAnEAqqqq