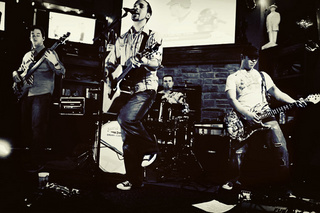 The Mikey Needleman Band is probably your favorite band, you might just not know it yet. A four-piece from Kansas City, The Mikey Needleman Band continues to turn heads and drop jaws in every venue they plug into. With their new EP release "Waiting for you," MNB takes you deep into a place that you didn't know you had; an empty but hopeful spot that dares you to get your heart broken. Record release is scheduled for Oct 1st, 2008. Stay Tuned.

Open to dicussion - Very flexible at this point.

Fox KC Music Debut by My Fox KC
http://www.myfoxkc.com/myfox/pages/InsideFox/Detail?contentId=7570001&version=1&locale=EN-US&layoutCode=VSTY&pageId=5.2.1
Live Loud and Local by Rock Kansas
Mikey Needleman is rapidly putting his mark on Local/Regional Music. With his 14 song CD entitled "Aint Got No Time" Mikey has proven that his original sound is bright, edgy and most of all fresh....
IFC News by News Greek
A great part about Sunset Revival is not only the new bands that come to play for the Christopher Reeves charity, but also the returning bands who always come back to contribute and play again for...
Music, dance performances entertain Open House att by K-State Collegian
Sunny skies helped bring crowds of people to the outdoor events at K-State's All-University Open House on Saturday.Several activities took place on Bosco Plaza outside the K-State Student Union,...
p
A
n
E
F
Song Title by Artist Name
987654d
LM
iAnEAqqqq