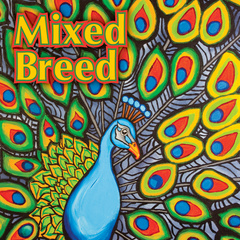 Mixed Breed is a Rock trio from Boulder Colorado. The band is best know for their song "Things I'd Like to Try" from their first EP Tracks. "Things I'd like to Try" was featured on KTCL 93.3 Locals Only Radio Show in 2009. Mixed Breed has been Ranked in the Top 20 Local Colorado bands on Alice 105.9 FM. The song "The Truth" was in regular rotation on Sammy Hagar's Cabo Wabo radio in 2009. Mixed Breed has now released their self titled album. Their new songs "Deja Vu" and "Wreck" have both been featured on 99.5FM The Mountain's Homegrown show. Mixed Breed has played Mishawaka Amphitheater, Steamboat, Crested Butte, Longmont, Louisville, Leadville, Fort Collins, Boulder, Englewood, Denver, and would love to come to your town too. For booking please contact mixedbreed3@gmail.com Read more: http://www.myspace.com/mixedbreedmusic

For booking and info contac