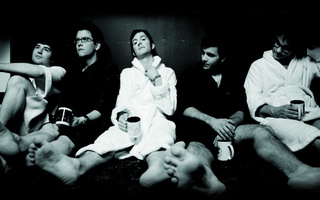 Recently featured on SPIN.COM for the premiere of their new video, No Second Troy is on the verge of making the jump to the national stage. The band's new LP, "Narcotic" has garnered critical acclaim nationwide, spending 3 weeks on CMJ's Top 200 playlist. Just two weeks after its release, the band was the featured artist of the week on XMU's R/A/D/A/R Report as one of the top unsigned artists in the country, and was added to the station's regular rotation. The band then went on to reach #5 on Alternative Addiction's Top Ten Unsigned Bands and charted at #8 on the K.K.B.B. Indie Top 20. After receiving spins in hundreds of cities across the U.S., ESPN featured "The Gardens After Lockout" and "Brighten Up" and "Burned" on Baseball Tonight and SportsCenter.

In a recent review, The Washington Post called the songs on Narcotic "as ready for primetime as you will ever hear," while TMZ.com tapped the band as one of the Washington-area bands with the talent to break out of the DC scene. OnTap magazine notes that NST is "already being called the best unsigned band in DC" for its combination of "radio accessibility and indie rock sensibility."

Featuring the earnest vocals of Jeff Wharen, backed by the band’s subtle layering of electric guitars, synthesizers, piano, organ, bass, and drums, No Second Troy has found a way to blend the pop hooks of bands like The Fray, Snow Patrol, and Coldplay, with the unique indie-rock arrangements of acts like Death Cab for Cutie, Arcade Fire, and Stars. In the spring of 2006, the band’s EP caught the attention of noted producer Ted Comerford (Army of Me, Zox, Virginia Coalition) and also landed them a coveted slot at the North By Northeast (NXNE) festival in June of 2006. After showcasing, the band worked over the summer and into the fall with Comerford and mixers Jeff Juliano (John Mayer, Jason Mraz, David Gray), Mike Plotnikoff (My Chemical Romance, All American Rejects, the Cranberries) and Paul David Hager (Goo Goo Dolls) to finish "Narcotic" for its May 2007 release. NST has played to packed houses at the Ram's Head Tavern in Annapolis, the Knitting Factory Main Stage in New York, the 9:30 Club in Washington D.C. and the Viper Room in L.A.