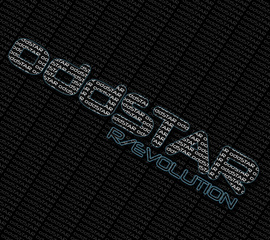 Formed in the early years of the 21st century as the solo project of mastermind Rayne, oddSTAR soon evolved into a full band and began playing shows across the Carolinas. They played several shows in support of goth-rock band The Last Dance and subsequently produced a remix of a track which was featured on TLD's "Reflections of Rage" CD released in 2004. Later that same year, oddSTAR was selected as one of a small handful of bands to play the inaugural Eccentrik Festival in Raleigh, NC, alongside such well-established acts as Razed in Black and Ego Likeness. Just as their momentum began to build in earnest, a series of personal crises required that the band take an extended hiatus. 2007 saw the rebirth of oddSTAR with an array of powerful new material supported by a new and more ambitious lineup who are determined to make their mark on the industry. oddSTAR's musical creations are formed using a synthesis of expressive guitar lines and complex electronic textures set to beats that range from driving rock to industrial dance to hip-hop influenced grooves. These otherworldly yet curiously familiar sounds have the power to fixate the listener while simultaneously inspiring movement.