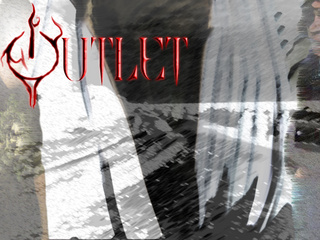 Outlet is an edgy Alternative Electronic Rock 'n' Roll Metal band from Salt Lake City Utah that incorporates the good ol' rock 'n' roll with some Electronic Metal. It's like taking Pink Floyd, A Perfect Circle, Megadeth, Sneaker Pimps, and Nine Inch Nails, and mixing it all together; Thus creating Outlet. BIO: Outlet was created by Tyler "Spyder" Sapp as a solo project back in June of 2007. Since then, Tyler has continued to write and record the music, then assemble a live entity of the band to help him perform it. Outlet has performed in several different places, from coffee shops, house parties, parks, to large venues and amphitheaters; Outlet has performed at: The Avalon Theater (SLC, UT) Ed Kenley Amphitheater (Layton, UT) College of Eastern Utah (Price, UT) The Outer Rim (SLC, UT) New Song Underground (SLC, UT) The Hole (Centerville, UT) Outlet has performed live over 11 times as of 11.21.08 Outlet took 2nd Place in the Gorilla Productions Battle of the Bands on August 22nd, 2008 at the Outer Rim in Salt Lake City, Utah. Outlet headlined at the Avalon Theater in SLC, UT on December 28th, 2007 OUTLET DISCOGRAPHY: The Dark Horizon EP (7.20.07) OUTLET (08.01.07) The Lost Highway EP (01.03.08) FALLLING AWAY (11.01.08) ECLIPSE: BECOMING A MONSTER (05.23.09) The latest album, Eclipse: Becoming A Monster, recently completed in May, is what Spyder describes as, "The First REAL Outlet album. It has a purpose, it sounds pretty decent, and it marks the direction of where Outlet is going with it's musical style. Spyder is currently working on a followup to Eclipse which he hopes to release sometime in early 2010.

Email Us
Feel free to message us anytime. Remember, we're people just like you